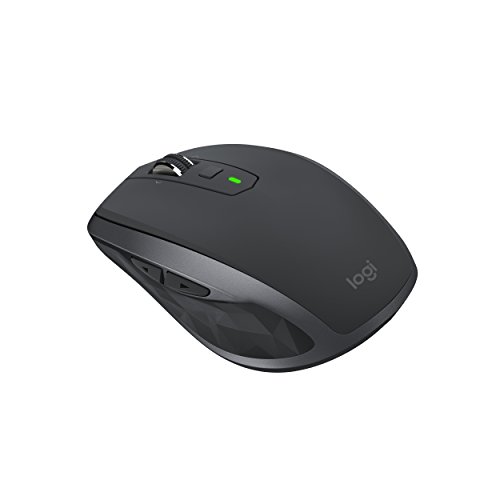 and the old VX Nano was probably my favorite laptop mouse - decided to spend the extra couple ...

Grabbed this mouse after seeing the Anywhere 2 on sale, and the old VX Nano was probably my favorite laptop mouse - decided to spend the extra couple bucks on the latest and greatest.

Size & weight - I know this is a matter of preference, but the size of the 2S is a good size for a laptop mouse, small but not painfully so, and a good weight in a small mouse.

Multiple connection methods - haven’t used Bluetooth yet, I use the mouse across multiple laptops and I’m not about to deal with pairing, but good to know I have the option.

USB Receiver - Small enough that it’s tough to pull out of some USB ports. Also the VX Nano had a slot to store the receiver on the mouse itself. The Anywhere 2S has no such slot.

Quality - While not exactly cheap, the 2S doesn’t feel as top of the line as the VX Nano. Rubber pads on the sides seem to be a cheaper material, seam in the plastic on the back which isn’t perfectly flush, etc.

I've always thought that the mouse was one of those utilitarian technologies that couldn't be improved upon and that Logitech, being the most dominant player in this market, would not have any incentive to make a better mouse. The Logitech MX Anywhere 2S proved me wrong. From the sculpted design to the weighty feel of the mouse, and right down to the smooth rolling speed of the hyper-fast scroll wheel, it felt very refreshing as if I were holding a mouse for the first time.

The mouse is well designed. It is rounded at the palm of the hand like any old mouse, but is more angular along the side edges and the front. Placement of the buttons is very natural. There is the forward/backward thumb buttons on the side, scroll left/scroll right button on the mouse wheel, and a middle gesture button directly below the wheel. All five of these buttons can be customized to your liking to control other content such as adjusting volumes, opening and closing windows, etc.

The mouse is powered by a lithium ion polymer which Logitech claims can last up to 70 days on a full charge. I’ve only had this mouse for a day, so I can neither corroborate nor deny their claim. The amount of battery remaining is indicated by the green led lights when you switch on the mouse. 3 green lights means the battery is fully charged, 2 lights mean it still has 66% charge, 1 light is 33% charge, and a red light means it’s time to charge.

One of the nice things about this mouse is that you have a choice of how you want to connect it to your computer, either through the unifying receiver or via bluetooth. The mouse is feature rich. To get the most out of the mouse, you need to download the Logitech Options software. Once you install the software, you can customize the buttons, make adjustments to pointer speeds, define the direction of the scroll wheel, and seamlessly switch the mouse to up to three different computers with the Logitech Flow technology. The Logitech Flow is pretty awesome and this is one of the features that you’re paying for in this premium mouse. This function allows you to seamlessly move the mouse from one computer to another and to copy and paste content from one computer to another with just the click of the mouse (note, you cannot drag and drop). You need to download and install the Logitech Flow software on the two (or three) computers you plan to use with this mouse and follow the on-screen menu that will lead you through the set up process. Once set up is completed, you will be amazed at how easily it is to cut/copy/paste content from one computer to another with the mouse. To get the mouse from one computer screen to the next, you simply move the mouse cursor to the edge of your first computer screen ,and the mouse cursor magically appears on your other computer screen and you could then control the other computer and paste or copy the file onto the second computer. It’s a pretty cool feature that Logitech provides to give an option on how to transfer files between two computers. However, both computers need to be on the same network for the Logitech Flow to work.

Another cool feature that you’re getting with the MX Anywhere 2S is the hyper-fast scrolling function. With a simple press of the wheel, the scroll wheel transforms from a traditional wheel that will click and scroll a few lines at a time to a hyper scroll wheel allowing you to quickly scroll up and down long documents or web pages with a low friction spinning wheel.

Other than those two main standout features (1. Logitech Flow and 2. Hyper-fast Scrolling), you pretty much have an advanced functioning mouse with customizable buttons. You also get Logitech’s Darkfield high precision tracking sensor which will track on any surface including glass which is useful if you find yourself in situations where you’re in need of using the mouse in a less than ideal surface.

In summary, Logitech’s MX Anywhere 2S is a great choice for anyone seeking a sleek wireless, high performance mouse with bluetooth connectivity needing to transfer files between computers or needing to control up to three computers with a single mouse. There isn’t anything negative I can think of about this mouse. You really cannot go wrong. The deciding factor is whether or not you will be needing to use the Logitech Flow or the hyper scrolling features. If you need them, then this mouse should be considered; if not, then Logitech has more basic mice offerings to select from at a lower price point.