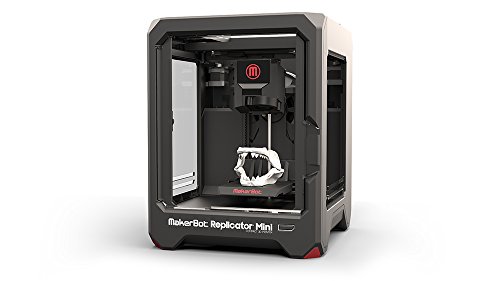 To say this is a super piece of technology would sell this little machine short. I have had mini for about a week and it is so cool.

Pros
You can use the soft ware of thingverse, makerbot or one of the many computer aided design programs out there and the tons of stuff othpeople have made.

You can use the camera to go out side do a little yard work, make dinner , or what ever else you need to do and just check your wifi device to see how your print is doing. It is nice you don’t need to stand there and watch any sit the machine.

There are many other pros for this machine but hre are the coup,e cons I have found

Consist it loud. Yes but not theater loud.
Only prints one color BUT you can change filament in mid print.

If your getting it to have fun to see where the technology is going and print out some real cool stuff this is for you. Not to mention school projects,etc…

I'm sad to admit it, but this printer really under-delivers, especially given its (now relatively high) price-point. I bought this printer for light freelance work, and most of the parts I print I cannot use because the extruder leaves little spider-web-like threads of plastic all over any detailed sections in the model.

If you are still considering buying it because of Makerbot’s awesome marketing efforts, know this
-Makerbot has a notoriously useless support team. I’ve spoken with many of the employees there and while they are super friendly, their team is just too overloaded with work and it takes them WEEKS to respond to any support request.

-The refund/warranty policies are pretty terrible, so you better really hope your machine doesn’t have any issues (and most of them do.)

-As of 9/12/14, the software is not really ready for consumer use. The wifi rarely connects, and the mobile monitoring function is basically useless since you need to be on the same wifi network as your printer in order to use it.

-The smart extruder is not so smart: it printed for 5 hours the other day before I came home and found it still trying to print when the filament was clogged.

-THIS MACHINE IS LOUD - louder than ANY other “desktop” 3D printer I’ve used. I feel like the house has to be empty for me to start a print, because I’m worried the noise will annoy everyone I live with.

-You have no option to remove the RAFT, which prints too close to the model every time and ends up being so stuck to your model that it requires hours of post-print cleanup work before a model looks finished.

-The normal sized (1kg) spools of filament dont fit in the printer’s filament holder, and the spools that do fit are makerbot proprietary so they are very overpriced.

On the plus side: