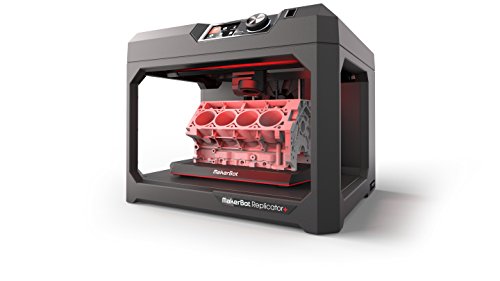 Much improved over previous generation, but still has print qaulity and noise problems compared to other brands

Updated review again based on order for spare build plate and grip surface pack directly through Makerbot. I ordered on the 26th of last month (more than 30 days ago) and after a dispute with them today, canceled the order because they cannot ship until maybe next week. Makerbot store cannot tell you stock status or how long you might wait for filament or supplies for this printer. It's pathetic in 2016 to find an online store and they cannot even tell you if they can ship you parts and supplies. I'm knocking this down to 1 star. At best, it was 3 stars for an overpriced and under performing 3D printer, now it's 1 star for the worst customer experience on the planet. If you need build surface or grip packs for this printer- best of luck dealing with MakerBot. It's not that they aren't friendly, but talking on the phone does you zero good if you need parts or supplies. Find another brand that understands logistics. The MakerBot name is trash. Again, I still have an ongoing ticket with them for print quality issue (ooze, layer alignment, infill). All these others giving 5 stars are not telling you the full story long term just one month into ownership.

Ongoing longer term review updated 10/25/2016 dropped a star to 2 stars. Makerbot is unable to tell me when they might have grip surface packs and the removable build plate. This means you as a new user cannot damage your existing build surface because you have no idea for how long you might be down if you damage it. I placed the order with Makerbot the 26th of last month, I have called support numerous times about this order, I’ve even spoke directly to a manager at least 3-4 times in the last 2 weeks. I waited 2 weeks and again opened yet another ticket on this order for spare grip surfaces and as of this morning, got a response that basically said they don’t know.
It’s not that Makerbot support is not trying to help, it’s that they cannot help. The company is the most disorganized I have ever seen it. Supplies, filament, and parts are a major concern going forward. On top of that, I’m still not getting comparable prints to other existing and cheaper 3D printers I own. The frustration just a month in of ownership is beyond all belief.

Review updated with new pictures 10/14/2016. Note the darker grey PLA is the new Tough PLA while the lighter pictures are the standard PLA. Also note, my machine required a repair to reduce binding in the X axis gantry. This did improve print quality significantly.
Most important, please, if you buy this printer, run the built in example test print Stretchy bracelet as soon as you get the printer. This is a great test to see quality and problems if they exist early on. If your machine does not print that test well, contact MakerBot support right away. See the first photo for what bad layer alignment looks like.

So here is the review by a trusted 3D printer enthusiast with a comparison to the previous Replicator 5th generation machines. First, let’s just jump right into the hardware. The mechanics have been completely changed for the better. The Z axis cantilevered shelf is a huge piece of cast aluminum as a single piece making it one of the most stiff and rigid Z axis designs I’ve seen. It really cost MakerBot a lot of money and investment in this new Z axis and the components pay off. At the same time, the entire XY H-bot style motion system was changed from a single stamped plate in the previous generation, to now a series of custom made aluminum extrusions and cast end brackets for the motors and idlers. The linear bearings are canted 45 degrees to bring even more torsional rigidity to the mechanism (a know weak point of choosing H-bot over Core XY). Another huge upgrade is that the new plastic frame is made of a different plastic formulation that is much tougher, and the mounting points for all attachments are now molded in threaded brass inserts. In addition, a Z upper safety limit switch was added in case during homing, something went wrong to prevent the axis from running into the extruder. It’s not used for homing, but is a nice additional safety feature. Finally, the noise reduction statements are from the change of the frame of the machine being stiffer, sound dampening material being attached to the metal panels, and the biggest one of all, rubber dampeners/isolators on the XY stepper motors. Almost forgot, the X gantry has the additional linear bearing and rail such that the moving extruder no longer hangs and can flex under the gantry as before. All of these changes represent significant engineering effort went into a serious overhaul and thus the + label is truly deserved.

All that said, it’s not all roses. Due to the electronics remaining exactly the same as before, the stepper drivers are noisy as before. If you hate the “robot” sounds, it might be quieter, but it still there. Note, this sound is louder than almost every other brand I’ve touched (I own 42 printers of all brands and models for those who know me). I would say it’s still uncomfortably loud to have on a desk next to you in a bedroom printing for hours. Also, the print quality is not great. Yes, it has printed something every time so far (I’ve only had it one day), but vertical layer alignment and errors like ringing (bumps at direction changes caused by flexing of components) are present in the print example files on the printer. In fact, the stretchy bracelet was the worst example where 2 sides of the object had very poor layers. I’ve also found that the raft was almost impossible to remove from the object. I honestly believe this error now (since the mechanic have been upgraded in the + ) is from the nozzle movement in the smart+ extruder. Basically, for Z homing, the nozzle can move up and down when it touches the bed triggering a sensor to home. That same movement is not precision such that the nozzle returns to the exact XY position every time. The return spring is intentionally weak to make homing accurate, but between required tolerance for thermal expansion and just bad design, the nozzle can wobble well more than a layer width (0.5mm from a 0.4mm nozzle) resulting in the poor vertical layer alignment. Basically, the retraction at movement to the next layer pulls the nozzle up, and allows it to move slighty in XY randomly when it begins extruding the next layer.
Another huge problem, no rubber feet!!! That right, a $2000+ printer that sits on the bottom of the frame with nothing but the plastic edges of the frame. In fact, there are protrusions on the metal plate that could damage your desk/table if not sitting flat.

So a recap: Greatly improved mechanics, frame, and overall construction. Again, hats off for this upgrade.
The bad is, the same electronics, no rubber feet, noisy, poor print quality, no heated bed, and while not “restricted” to MakerBot filament, the warning stickers put some fear into you.

I cannot deny, it printed out of the box. The setup was easy. No leveling, no adjustments. The new software is simple, and maybe somebody likes it, but a professional user is likely to be frustrated.

It a tough call here, so make your own informed decision. On one hand, this is easy for even the novice to use. Likely, you will have fair success in printing an object. If you are a pro user, if you have access to other brands of machines, you are likely to be unhappy with noise, performance, print quality, and lack of settings in the software. The real difference here is the old 5th gen, I honestly could never say it was a good printer, and definitely for the price. This new printer is greatly improved on the hardware level. It really is wonderful engineering. It’s crippled by the electronics which are the root cause of the noise, and smart extruder system with the sloppy nozzle that can wiggle left and right in the down position. Fix those 2 things (and might as well say the software too given the latest release) and it might be a good printer for folks starting out.

Also, minor rant about the software. The new version is the worst ever to a pro user and maybe even to amateurs. The symbols representing actions and buttons are cryptic and it just has very, very, very, limited printed settings (raft and support on/off, infill%, and shells, layer height, and extruder type). I highly recommend you download the latest version if considering buying this printer. Don’t take my word for it, see for yourself.