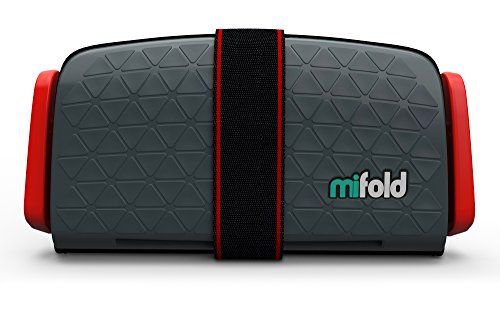 A revolutionary, game-changing product but can use some improvement.

I've been following this product since 2015, participated in the company's crowdfunding and have been eagerly waiting for my mifold to arrive for months. I haven't received that one yet, but imagine my surprise and delight when a mifold showed up in the Vine program, so I quickly grabbed one.

This is such a brilliant concept. The purpose of a traditional booster seat is to raise the child up a few inches so the car’s seatbelt, designed to fit an adult, can be safely used by a smaller-sized human - the lap belt should not sit at a child’s waist. What the mifold does is to bring down the seatbelt to properly restrain a child. Again, brilliant.

Part of finding a good booster seat involves how well it fits into your car’s rearseat design, like the slope, shape, etc… The best booster seat is the one which fits your car properly. Because the seat portion can bend in half, this allows more flexibility in the type of backseats a booster seat can be placed. The mifold is also great for a larger child who sits too high for a booster seat but sits too low for a car’s seatbelt during that in-between stage. It’s not as if every child needs to be raised up about 4-5 inches for a proper fit.

On the flip side, the mifold may not work as well for shorter children. Since a car’s backseat’s depth is most likely deeper than the length of a shorter child’s upper thighs, the child’s legs would be sticking out straight when used properly. Okay, fine, but if the child wants to bend his/her legs at the knees, the child may sit closer to the edge of the backseat, which will make the butt slide farther away from the crease of the back and possibly make the child slouch. Again, depends on the car’s backseat and the child.

Then, its size… OH, ITS SIZE!!! If you’re short on backseat width and have a smaller child who doesn’t need the entire width of a traditional booster seat, the mifold will give you those few precious inches for a better 3-across. For the caretakers of 3 kids who feel like their non-minivans/large SUVs won’t accommodate multiple child restraint seats but can’t afford to buy a larger vehicle, the mifold may save your budget.

It’s a bit heavier than it looks. The seat bottom is rather firm and small - it’s a little over 8" by 8" when unfolded. I was concerned this would be too uncomfortable for the occupant, but it wasn’t, possibly because a car’s rearseat is very cushioned, allowing the mifold to sink into the cushion. An adult weighing a bit over 100lbs tried it for testing purposes only, and the adult felt fine.

The width can be adjusted out to 13.5" internally at the upper thighs, then tapering to a width of 13.25" closer to the knee - the lap belt guides angle in a bit. The red lap belt guides should not be so narrow they touch the occupant.

I’d give this 5 stars for ingenuity and practicality, but there are a couple of issues:

Other quirks that don’t affect the star rating:

It’s obvious a lot of thought went into designing this. With the mifold, there’s no excuse for not using a booster seat, even when traveling. Besides the mechanisms of the guides, I love this product. I hope this gains more popularity so the difficulty and unfamiliarity of using the mifold disappears. Or, maybe the next generation of mifold will improve it. I don’t know if this can replace traditional booster seats for some but for traveling and carpools, this is practically a must-have safety item without compromising convenience. In the meantime, I continue to wait for the mifold I ordered via crowdfunding while being grateful for the opportunity to receive one for review - many thanks to Jon Sumroy, the mifold team and Amazon’s Vine program.