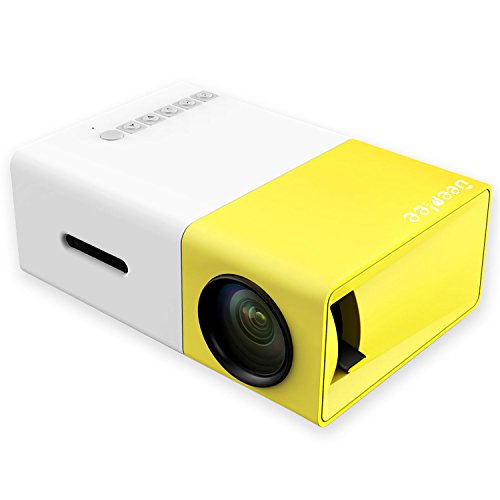 Decent quality and surprisingly feature-packed, but it is a $50 projector after all....

First of all, it seems that some of the more negative reviews are based upon great expectations, as if this were a $300 projector. Keep in mind that this is an entry-level projector,and my review/rating is based upon that. You're probably not going to get gourmet food from an Easy Bake Oven, right?

I’ll let you run through the description and reviews, as there’s little to expand upon, but will point out some things not discussed, as well as a couple things I wish it had. I have hooked it up to Google Chromecast, and it is rather good quality, but my smartphone (Samsung J7) does not support direct hookup via MHL-to-HDMI cable.

This CAN display in 4:3, 16:9, and “auto” (whatever that is) aspect ratios. (Edit: The “Auto” setting is exactly what is says it is; it automatically displays the video’s correct aspect ratio, even today’s more “standardized” 2.35:1.) There are two ways to change from the default 320x240: one, the main menu, under “movies”, or two, during playback, hit “ok” on the remote, and hit the “right” button until you get to the second page of the on-screen menu (where you can find more options, like frame advance, and zoom). In fact, there are quite a number of adjustments one can make via those two methods, including EQ (2 different EQs: a five-band, and a simple bass/treble control), and aspect ratio, among others.

If you take the time to look through the various menus, you’ll find quite a bit of customization available.

For those having trouble focusing their picture, one method that’s about as precise as one can get, is to use the on-screen menu (press “ok” during video playback), and focus on the elapsed/remaining time, or other word on that particular screen. Not scientific, but since there is some sort of sweet spot where you can optimize focus without pixellation (around a 6’ throw), every little bit helps.

Wishes: One, a bit brighter… I know, but still a little makes a big difference. Two, an actual zoom lens (though there are zoom controls of sorts in the on-screen menu mentioned above)… it would certainly aid in focusing, in addition to customizing the actual size of the picture. And three, the menus of my media need revamping… the listings are under 10 characters, so for example, I have Star Trek TOS and TNG full seasons on my thumb drive… so while I might be able to see what season/episode I’m selecting, there’s no room for the title (a non-grid listing option is sorely needed). (Edit: If you’re watching a movie, the on-screen menu has a choice on the second page, called “playlist”, which shows titles - only a few more characters, but a huge improvement - of all videos in the folder where you are watching the video from. Still, this could be greatly improved with a more detailed “list” mode.)

Pros: Better-than-expected quality, several source options (USB, HDMI, SD Card), digging into menus unearths some customization, pretty close to plug-and-play, small size, loud speaker
Cons: Picture on the dim side, could benefit from a zoom lens, instructions could use some expansion/clarification, on-screen menu of your media limited to under 10 characters (so you might not know exactly what you’re selecting; setting up subfolders helps), some small graphics are unreadable, possibly including subtitles (but not nearly as bad as some reviews make it out to be).

Again, this is a sub-$50 projector, so don’t expect movie theater quality. But all in all, this is a surprisingly good little unit (I put this on a tripod, swung it up 90 degrees so it shot on the ceiling, plugged in a 64Gb thumb drive, and watched “Apocalypse Now” last night, and it wasn’t bad at all.) For what it is, it packs a lot of features, but this isn’t the unit to project on the side of your house for neighborhood shindigs; more like an apartment, bedroom, den, or maybe a living room. If you’re looking for something small (a camera bag or GPS case makes a nice carrying case for this and its accessories), just to see what a projector can do, before sinking a bunch of money into a higher quality projector, or you’re looking for something to carry around as a backup projector for a powerpoint presentation, this could be the unit for you. Just don’t expect IMAX quality.

@geek30 Not sure yet