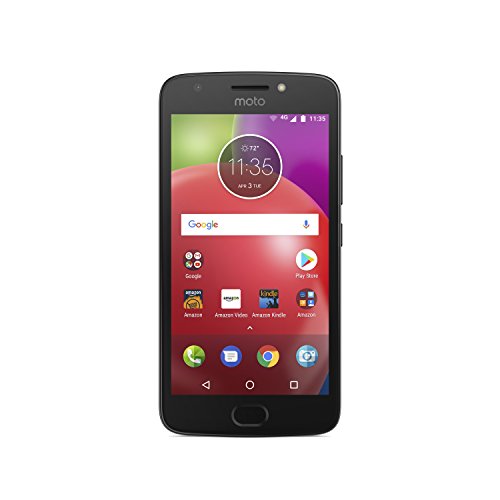 Just received my Motorola Moto E (4th Gen) and I'm impressed with how nice it feels in the hand. Amazon will sell a boatload of these things. The new Moto E4 looks like it had a Moto G5 Plus as a father and a Moto G Play as a mother. The 5 inch size will fit well in anybody's hand and is a good size for a man or woman. This phone is thinner than the G Play and like that model, works on all four major carriers as well as their smaller MVNOs. Verizon beat out Amazon, introducing the Moto E4 a week ago, but that model can only work on the Verizon's CDMA network and only has 4 LTE bands. It is $30 cheaper than the Amazon version, but you lose the flexibility of being able to drop any carrier and go to another. That alone, can save you from having to buy another phone. This phone gives you the flexibility to drop AT&T and go to Verizon or T-mobile. Not very many phones support Univeral Carrier Access!

The Moto E4 is powered by a Snapdragon 425 chip that is surprisingly speedy for a low-priced phone. It won’t play Asphalt 8 as well as a Samsung S8, but for less resource-intensive games it will be fine! Just for the technically-minded here are 2 popular benchmark scores

These scores aren’t going to impress a hard-core gamer, but for most people, they’re pretty good! The newer 400 and 600 series Qualcomm chips aren’t much slower than the 800 series from a couple of years back. This phone takes a nano-sim, so you may need to see your carrier or have a friend trim your micro-sim to use it in this phone! The camera is an 8 MP 1080 P shooter. I took a couple of daylight snaps and they looked quite decent! The 5 MP selfie camera has a flash …a nice addition. I’ll post them to this review later. This Moto model has a micro USB input for charging, not the USB-C type which is on newer, more expensive phones, so you can re-use your older cords and chargers.

Here are the available bands:

The fingerprint sensor works very well and is a great feature at this price point!!

This phone like the G4 and G5 Plus Moto models, also features dual-band Wireless N, so you folks with dual-band wireless routers can take advantage of the 5Mhz band, releaving the stress on your overburdened 2.4 Mhz band. This makes for faster app downloads and YouTube and Amazon Prime videos that don’t stutter and drop frames! Put that cable TV app on your phone and you have another TV set!

I’d recommend the Moto E4 to anyone who wants a quality phone at a low price. It’s a better buy than the older Moto G Play, which sells for the same price. It has an even newer version of Android Nougat 7.1.1 (May 1, 2017 security patch) than the Moto G5 Plus. It’s a great first smartphone for someone or as a backup to your flagship phone. It’s also perfectly suitable to be the daily driver for someone who really doesn’t need an expensive phone. Buying this phone, is like buying a Toyota Corolla …it’s not super fancy, like a Lexus, but it gets you where you need to go!

I picked up a few accessories when I ordered this phone as well. I got a micro sd card SanDisk Extreme 32GB microSDHC UHS-I Card - SDSQXAF-032G-GN6MA [Newest Version] which I formatted for Internal Memory. It’s a faster u3 type which is better to use as internal storage. I’ve also switched to glass screen protectors, which surprisingly, are easier to install than the matte or clear sheet type are. Moto E4 Screen Protector, Wellci [ 2 Pack ] Tempered Glass Screen Protector for Moto E4 (Ultra Clear) This was one of the few brands available when I bought my phone. The selection may be better now. For a case, I purchased the Moto E4 Case, LONTECT [Heavy Duty] [Shock-Absorption] [Kickstand Feature] Hybrid Dual Layer Armor Defender Case Cover for Moto E4 - Grey I like this style of case as it offers good protection and has a nice stand to use your E4 as a TV or for watching your Amazon Prime and YouTube content. It is available under several brand names!

Update: 08/01/2017 Last night I was in Walmart, and saw they are selling the Verizon Prepaid version of the Moto E4 for $39.95! For Verizon prepaid customers who need a better phone, its an absolute bargain. But please be aware that its a locked phone, that only has Verizons LTE bands 2,4 and 13, so you cant use it on AT&T or T-Mobile or smaller MVNOs that buy minutes from them. It lacks a GSM radio! Verizon gives you a hard time if you want to use it on your postpaid account, so be aware of that situation as well!
Sprint and its discount daughter Boost, as well as Metro PCS, are now selling the Moto E4 in gold. The drawback is that it doesnt have the fingerprint sensor on it, so its not such a great deal for $49.95