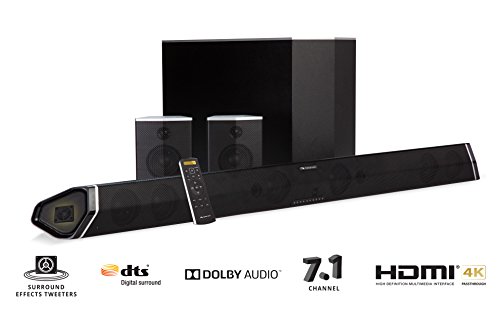 Vizio and Nakamichi (most other brands like Samsung, Sony and Sonos have simulated surround)

I recently moved into a new place. Looking for a soundbar to replace my Vizio S4251 which was the number 1 rated on Amazon back in the days. Also need another soundbar for my larger bedroom. Wanted to stay with a 5.1 true surround setup without having to purchase a home theater receiver and separate speakers. Did quite a bit of research, surprisingly, there were only two brands available with this surround configuration, Vizio and Nakamichi (most other brands like Samsung, Sony and Sonos have simulated surround). Vizio has a new model SB4051 which I believe is a direct replacement to my previous soundbar. I am somewhat familiar with the Nakamichi brand from the high end audio days. From a pure spec standpoint, the Nakamichi shockwafe seems to be superior, more speaker drivers, longer width, louder, bigger subwoofer, DSP modes and HDMI with 4K Pass Thru, etc. They also claim to be 7.1 channel with two additional speakers on the side.

Purchased both units to do a sound off. The winner will be in my living room and other for my bedroom. As a big fan of my old Vizio, I opened the box first and noticed much improved design and aesthetics on the newer model. The new HDMI input is a big plus! Then comes the Nakamichi. The design is also quite attractive. I immediately noticed the difference when I placed both units under my 55" Samsung 4K TV. The 5" width difference makes the Vizio less appealing visually. The subwoofer is also quite a bit larger 8" Vs Vizio’s 6". The additional HDMI input and 4K pass through complements my new 4K TV. Connections were fairly simple for both units. Took me less than 10 minutes each. The two rear speakers connect directly to the wireless subwoofer in the back of the room, eliminating surround sound wiring nightmares.

Both units were a joy to listen to. I wouldn’t call myself an audiophile but I could instantly hear the difference. The Vizio sounds as good as my previous one but the Nakamichi sounds “AMAZING”! Vocals are clear without overpowering by the rich, unified sound at all volumes. I rewatched the Martian using my Blu-ray player and a few episodes of Narcos, Dare Devil and House of Cards on Netflix. For some reason, I could hear a lot more details on the Nakamichi and it felt like the soundstage was much wider with surrounds coming from all directions. At 50% volume, the Nakamichi was much louder than the Vizio’s with noticeably better bass. At 70% volume, I can practically feel the tight and deep bass in my chest.

I then tested BT on both units with CDs, Spotify streaming and Sting and Adele live concert Blu-ray disc. Results were similar with the Nakamichi outperforming the Vizio. The sound is balanced whether I am watching a live music concert or an action movie. One thing I really noticed again was the size of the soundstage, it was huge. The additional side speakers provided extremely good extension details on both sides of the room.

I also enjoyed the simple and user friendly remotes on both units. The Nakamichi’s form factor is a bit easier to hold and the backlit display functions much better than Vizio’s in a dark room.

From a price to performance standpoint, the Nakamichi is hard to beat. Im really happy with this purchase and highly recommend it.

TV Soundbars...Are they worth it? - Nakamichi Shockwafe Pro Review

Nakamichi Gets it Right

Nakamichis new Shockwafe Pro 7.1 Chanel (GEN 2, firmware update 1.4) offers a truly great and enveloping sound experience to watching TV, BlueRay, Streaming, or Games hooked up to it. Unlike other sound bars, and even some traditional home theater sound system setups, what struck me is that sound is not suddenly shifted to the back or sides but rather it creates a flow around filling in between. Yes, when the sound should be behind you hear it as such, but it is not as if the rear speakers were suddenly switched on. The sound is much more natural, as if you were in the room with the sound doing a smooth blended transition on the sides and around to the rear, not just bits and pieces being at overtly distinct locations.

Given the some limits on Bluetooths ability with audio as compared to copper wire, I did not notice a shortfall in sonic range or clarity even while driving the system at full volume while listening to music which covers very low to very high frequency content (Renaissance Live at Carnage Hall, released 1976). The base was not muddled and the operatic high vocals were crisp, clear and did not clip. It was very much like when I saw them live many years ago in Chicago when vocalist Annie Haslam hit high notes at a sound level that literally stopped my breathing for a moment this differed only by being not quite so loud - thank goodness. When switching out of Bluetooth to another input in the Shockwafe Pro, the audio source is paused. There is an option to connect with a 3.5mm cable which is included.

Dialog from the center speakers is not lost, but remains distinct, even with the front side speakers being in such close proximity to the center speakers, which is a concern with the sound bar concept. In this case it was clear and present as it should be. There is a depth and fullness to the sound from the Soundbar alone which just by itself makes this a great addition. Bass response from the Subwoofer is present and felt, but does not dominate. The rear speakers provide a full rich range and do not have a tinny sound despite their compact size.

The new firmware update has CEC working as it should. I have the Shockwafe in a setup with a DVR and a Panasonic 3D Plasma, and when the DVR remote turns on those two components, the Shockwafe also turns on as well as off with them, there was not even the need to add it as a device then input a code into the remote, thus making the Shockwafe as if built in to the TV, just seamless. Obviously not all functions are available on that remote, but then again the remote does not have full capabilities for any device other than the cable companys DVR. For full control in a single remote, the Nakamichi is easily recognized by newer Logitech Harmony remotes. Using the remote (or just starting the player manually) to start a BlueRay automatically switches the Soundbar to the HDMI 2 port. The Shockwafe Pros own remote is a small, clean design with a backlit screen to see which commands and settings are being sent. In a break from everyone else, the color is a yellow-orange with black offering easy reading in dim light. It has the ability to learn from another remote such as the DVRs and become a universal remote, a nice option.

Among the included cables are the mentioned 3.5mm audio, an Optical and an HDMI to link the TV HDMI with ARC port to the Soundbar for communication and control between the TV and the Soundbar. What will be needed is the one from the DVR (HDMI) and another for a second source like a BlueRay Player (HDMI). Using the Optical port allows a third input, the Coaxial port a fourth.

The physically small rear components allow placement so that they dont stand out and dominate the room but blend into the decor in much the same way the sound from them just blends in. The larger Soundbar spans more of the length of larger screens so it does not look like an afterthought appendage, but rather a complimenting design intent. Wall mounts for the Soundbar are included.

Lastly, but far from the least important aspect of this product is the Company behind it, and specifically the President, Rayman Cheng working to build on Nakamichis history. Their customer service is superb and they have been actively working to improve the product with firmware updates that have even offered new or expanded capabilities. Most times we buy a product and that is it, rarely can we consider that our purchase might even become better afterwards. Sadly too many companies are not run this way. I had a review posted before but removed it and replaced it with this one because the Customer Service they provided helped me get past some glitches I had so that I could truly enjoy their outstanding product.

Nakamichi gets it right.