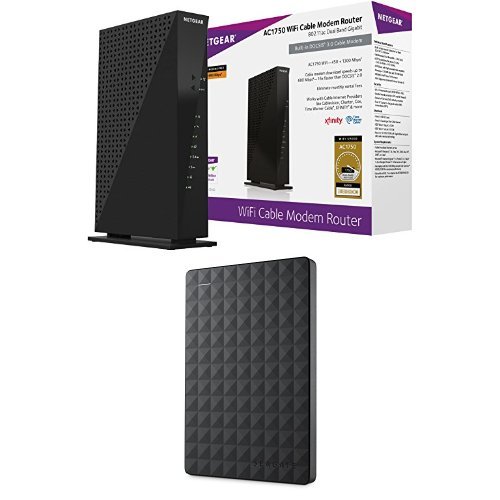 I went through two modems before buying this one that promised fast speeds but didn't deliver. No problems with set up as a Time Warner customer and have great range as well. I wish I would have bought this one to start with and for an extra $20 got a 1tb portable hd too!

We recently moved from an area with AT&T Gigapower to an area where AT&T only offered 12 Mbps. Thus, we were forced to go with Comcast Xfinity, and we opted for the Blast! service with speeds up to 150 Mbps. Significantly slower, but we figured it should be acceptable. What we didn't anticipate was the limitations of Comcast's equipment (AT&T's worked great). The router did not reach our entire house (2,200 sq ft one-story), so we bought a Wifi Range Extender. This helped, but we now had issues with our devices constantly changing networks and cutting in and out - almost worse!

Finally, after receiving an email that they were increasing our speeds to 200 Mbps, we realized we needed to upgrade our equipment, as we likely weren’t even able to see these speeds realized with theirs. On our Wifi Extender, I was only getting 12 Mbps on a 2015 MacBook Pro, capable of 802.11ac.

This cable modem / router combo got fantastic reviews for Xfinity service, so we were in!

First off, installation was a breeze! Simply unplug the old equipment, plug this in and GO! After connecting with my laptop, it immediately prompted me to activate the equipment on our Comcast account. All I had to do was enter my account information (username and password) and the equipment was activated and up and running. No phone calls necessary.

Of course, the first thing I did was run a speed test (on Wifi, right next to the equipment) and I was floored to see that I pulled speeds BETTER than the tier we are paying for (234 Mbps down / 12 Mbps up). And that was on Wifi!

Couldn’t be happier and we’re kicking ourselves for not making this change sooner. Not only are we getting the service we’re paying for (and then some), but the range reaches the entire house, so no more extender and bouncing between networks.

Oh, and no more equipment rental fee from Comcast, meaning that I won’t end up paying thousands over the years for a $100 piece of equipment!