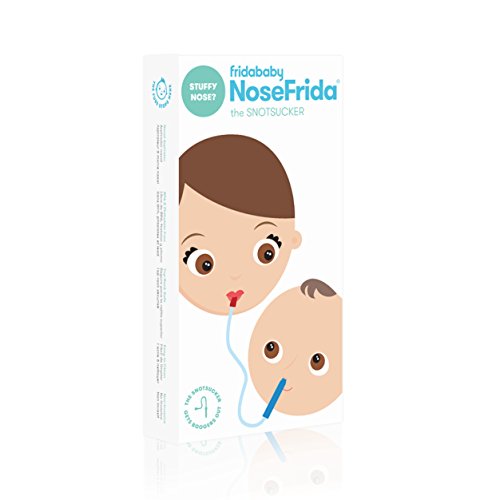 IT SUCKS BOOGIES & catches them in a tube to eat later

my wife has tiny nostrils. i can't fit any of my fingers in her nose...it's amazing she can breathe through her nose at all. consequently, our son is also lacking in the nostril-diameter department. he gets boogies...he can't breathe very well...he gets upset. it's been like that since he was born, whenever that was...recently. i forget, but i digress. we came home from the hospital with a pretty decent nose-sucking bulb...it did a reasonably OK job of sucking out boogers...and was reasonably firm and springy. but then our dog ate it. so, i tried to find a replacement. not all bulbs are created equal, i soon found out. some were too hard to squeeze and didn't spring back quickly enough. others were too soft to suck anything out and just sat there, mocking me. i tried at least four different replacement bulbs, none of which were as good as the one from the hospital. we even tried a fancy battery powered nose vacuum that made a whirring sound but produced nary a single lump of green gold. while ordering the various, useless bulbs i also ordered this thing - the nosefrida - on a whim thinking i was probably wasting $13.

BOY WAS I WRONG.

this thing works. it sucks boogers out of noses. it even stores them in a little tube to eat later. or, you can just wash them out in the sink. anyway…it works better than any of the other things we tried…and we tried pretty much everything. there’s a technique to it:

if i was a professional booger sucker…and it was my job to suck the snot out of noses 8 hours a day, i would insist on using this thing. but i would want a longer tube, and a holster.

I've tried the regular bulb suckers, electric suckers, even a different tube sucker, you name it. This is the only product that actually quickly removes all of my daughter's mucus. Easy to clean, easy to use. Definitely recommending to others.

@michigan Thanks, You are the best