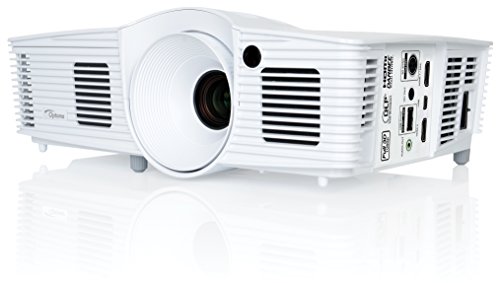 Before buying this projector, I literally read every expert review about it on the web, including those in other languages. The reviews all boiled down into two groups:

–and those who thought that the projector was amazing, the closest thing to a 4K projector you could get with a sub-$1000 projector, thanks to the Darbee Image Enhancement capability, with fine colors, contrast and performance, well worth the typical $799 cost.

I paid for this projector with my own money, buying the bundle that includes the $50 gift card. And the truth, at least for me, was in the middle of those two groups of reviews that I mentioned.

I upgraded from the Optoma HD20, which was a fine HD projector that I bought about 4 years ago and is now discontinued.

The HD20 did not have 3D capability, so I wanted to get a new projector with 3D and also with better contrast, resolution and brightness. Because of its low lumens, it was always difficult to use the HD20 projector during the day. I wanted something better.

Is the HD28DSE better and if so, by how much?

It’s better, but not by as much as I had hoped. After making projector adjustments suggested on some expert web sites, here are my comments:

Once I use the $50 Amazon gift card bundled with the projector to $750, and once I sell the HD20 and apply that to what I purchased the HD28DSE projector for, I’ll feel that I got enough value from the new projector. But I was hoping for something better.

From what I’ve read from expert reviews, the BenQ HT1075 and the Optoma HD37 might be better than the HD28DSE for a sub-$1000. I can’t say for certain myself because I would need to see the projector image in my environment before being able to accurately talk about other projectors.

If you’re considering buying the HD28DSE, it’s a decent projector, but consider other options as well.

Update after 4 months from purchase:

After 4 months of use, I’ve enjoyed the projector and would add a half star more if it were possible, but I’ll let it round out to three. This is what I’ve encountered over the 4 months:

Visual Artifacts: Still there occasionally, but not enough to disturb most of my experiences.
Contrast: Still not that great in very dark scenes, but it’s adequate.
Fan Noise: The fan is loud. It doesn’t make a difference for me because I have a surround sound system that’s usually louder than the noise, and the projector hangs from the ceiling about 2 feet in front of me. But it could be a problem if the projector is going to hang right over your head.
Projector Placement: It’s very hard to position the projector in a way that’s completely aligned with the screen while not necessitating keystone corrections, which diminishes resolution. So I’ve had to live with part of the projection being skewed and running off the screen.
Darbee: It’s advertised as making the image look as good as a 4k projection. I have a good 4k TV and I have to say that when all the “ducks are in a row”–the Darbee is adjusted correctly, the source video is has solid HD resolution, and the bandwidth is good, the result does dramatically improve visual quality and make it on par with good 4K. That’s what I would add the half-star for.

Bought this projector after much research to replace older Optima that was "snowing" out. Much nighter and clear picture. Recommend knocking down Darbee after purchase. Made CGI like too fake. That's how clear this picture is. Best way to get a large screen experience. 12' screen has impressed all the family. New destination for Super Bowl party.