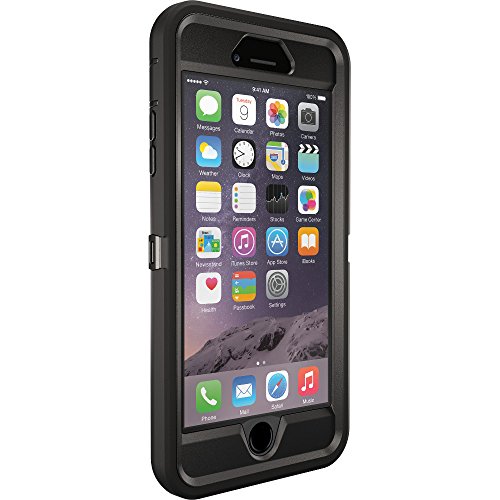 I bought one of these a few years ago for my new 6+ at the time, and it's been only average in typing ability...it was difficult to press the screen, but the protection was excellent so I kept it. I needed a new case and bought this new one, and it's awesome!! They must have improved the contact area between the phone and the plastic cover...it's so nice! I love this series as it's so good for the phone...must have cover!

About me: I’ve owned several Otteroboxes in the past. I drop my phone all the time and absolutely need to protect it. I love Otterbox cases.

Today, I received my Otterbox iPhone 6 Plus case; I ordered it the day it became available on Otterbox’s web site.

After reading many unflattering review about the iPhone 6 (not the Plus) case, I was very concerned about spending so much money on a case I wasn’t sure was going to make me happy.

Fortunately, I am quite pleased with the case. Like every Otterbox case I’ve owned, it is quite rugged. As I said, I am crazy clumsy, and I drop my phone often. This case looks as rugged, if not more so, than the iPhone 5 case I had before this.

There are comments in the reviews on Amazon about how the screen isn’t flush against the case. It is true, it’s not exactly flush, but it’s not as bad (to me) as some reviewers have stated. Until this case came today, I was using a fairly rugged Unicorn SupCase. The SupCase isn’t as sturdy as the Otterbox, and the screen gap on the SupCase was more pronounced than the Otterbox. Of course, the SupCase was much less expensive. I guess I’m saying the Otterbox is not perfect, but I believe I can live with a minor screen gap, because the Otterbox is so protective.

The covers for the buttons are very rugged, and stiff to open. It looks like there is plenty of clearance for chargers and audio cables. I’ve included pictures to show the ports.

The case is bulky, but it doesn’t seem any more so than the previous Otterbox cases (except of course, the phone is larger

The fingerprint cover works fine. Again, I’ve included pictures to see the size of the case in my hand.

So, I think I’m going to be happy with this case. If I feel differently in the next few days, I’ll update my review.

It’s been about three weeks, and I’m still quite happy with the case. The case still looks very new, even though I’m not particularly careful with my phone. The screen gap doesn’t bother me at all, now. It took a few days to get used to it, and now I don’t notice it at all.

Another month with the case (about six weeks total now), and I’m still very happy with the case. One thing that surprises me is the case doesn’t seem to get as scuffed as my previous Otterbox cases. Again, I’m not careful at all with my phone, but the case still looks almost new.

The gap between the screen protector and the phone still doesn’t bother me (it initially did for the first few days). When my girlfriend uses my phone, it bothers her, but I guess I’ve gotten used to it.

The only thing that bothers me slightly is the fingerprint/home button protector. It’s very thin, I guess so it will read your fingerprint. It isn’t damaged yet, but I’m a bit concerned that it may become damaged because it’s so thin. I also have a bit of trouble with the phone reading my fingerprint the first time.

Still, I love this case. I’m not considering anything else. I’ll stop updating this review, unless something changes, or anyone has questions.