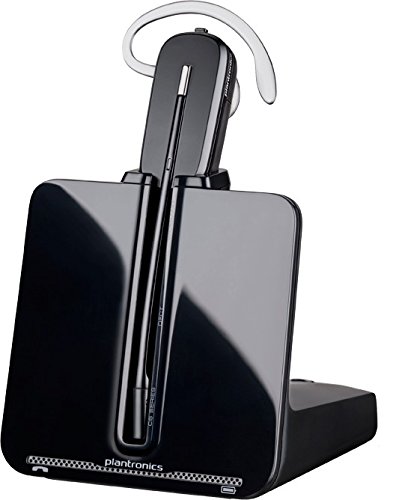 I bought this item as a replacement for my old CS55. My CS55 worked fine in my last two offices but when I came to my new job customers would tell me that they couldn't hear me when I spoke to them. I could hear them, but I would cut in and out and it was quite frustrating.

This product came on time and worked perfectly out of the box (despite the UPS box showing up like it had been mauled by a bear with chainsaws for arms…great job UPS…but I digress).

This was very easy to setup and the base is actually smaller than the old CS55 which is great for the limited space on my desk. It came nearly fully charged and was ready to use in about 20 minutes. I use the headband+earpiece because it is more stable than just the earpiece, and it it sits comfortably over my head. The sound coming through into my ear is clear and crisp.

The volume and mute button is much easier to use than on the old CS55, it protrudes more and is easier to push. The volume button makes a toned noise as you go up and down which is somehow kind of nice and refreshing. There is also a light on the base…green means it’s on, flashing green means it’s charging, and red means you have it on mute.

I am able to wander further from my desk than with the old CS55. In fact, I could go through a door to our kitchen area which is separated from our office by a central dividing wall and I could still hear the conversation and speak as well. I can now get more coffee while on long calls.

The actual microphone arm is more versatile from an adjustment standpoint, instead of only rotation on an axis it is actually more of a ball and socket type thing which allows for some spherical adjustment (up and down as well as closer and further from your mouth).

The best is that there is zero interference from the 20 other wireless headsets in my new office.

I am extremely satisfied with this purchase and would recommend it to any sales professional.

our office has worn/used Plantronic wireless head sets for years. I just purchased 5 - of the 540 units and everyone one of us have been complaining how the plastic ear holder is so uncomfortable. The last wireless was flexable and very comfortable.

Have used these in the past. Works with Avaya 9608G IP phone. Easy setup and crystal clear on calls, for both caller and receiver.