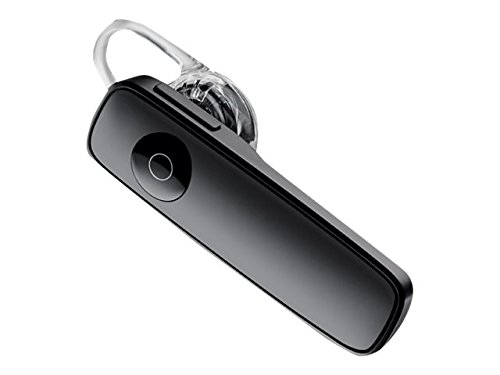 Pick this over Jawbone Era.

I previously owned a Jawbone Era and will compare these two items.

While receiving calls: Jawbone reads out the phone number, then you can press the button to answer; Plantronics just says “answer or ignore” and its up to you to say either word to answer the phone or not. You don’t need to press a button which is a nice feature people who cook and touch raw meat, or cannot touch the button because your hands are tied up.

Tracking: I really love the app you can download onto your smartphone for Plantronics. If you forget your bluetooth, maybe at a friend’s or relative’s house but aren’t sure, you can open the app on your phone and use the GPS signal. Also, if you misplaced it somewhere in your room but cannot find it, the app allows you to send a Tone to the bluetooth so you can hear it beep to help you find it.

Plantronics app also has a battery tracker for your bluetooth which shows exactly how much life you have left.

Sound: Both sound very clear. not much to say.
Mic: Jawbone has a Better background noise cancellation built in than Plantronics. However, this Plantronics does have a solid one built into it also. Both bluetooth devices are mics that are solid enough for people on the other end to hear me speak in a regular tone (no need to speak loud).

While i did like Jawbone Era, I would recommend the Plantronics M165 based on battery life and the App on the smartphone. Both are very solid as far as being a Bluetooth device. However, the features on the Plantronics and the Price of it overshadows the Jawbone Era.

Don't leave home without it

This is an awesome Bluetooth! I purchased it for my boyfriend this summer as a gift and wished I had gotten one for myself. I purchased it from another store for more than double this price so this price is awesome! I own another model Plantronics Bluetooth but the model was discontinued and it was larger than this size. This Bluetooth is a very light weight Bluetooth but not flimsy. It fits snuggly so it doesn't feel like it's going to fall out. Sometimes my boyfriend is looking for it only to realize he has it in his ear. I love the charger it comes with a wall charger. The different ear bud sizes are great too so you can get the fit in your ear that you need. I don't use the voice command to answer but it is nice to have. It is very small and fits nicely in your ear and is a comfortable fit. I would definitely recommend this Bluetooth to anyone. Plantronics is a really good brand and this price can't be beat.