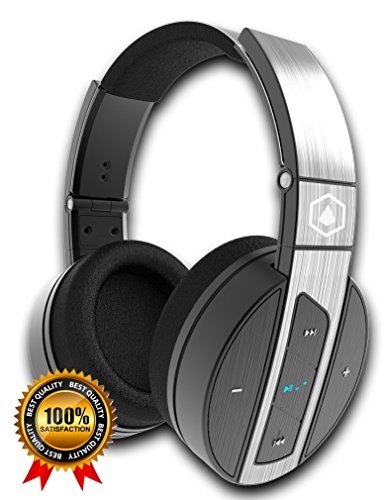 This is clearly a first iteration of what may someday be a good product. Right now, it's somewhat functional, but has some bugs. The main one is that, upon starting to use the headphones after a full charge, they run for about 3-5 minutes, then whatever you are listening to is completely interrupted -- not faded a bit, but cut out completely -- while a charming female voice says, "battery medium." First of all, after only a few minutes of use? This is not accurate -- the battery is good for about 2-3 hours (not very good battery life, IMO). Second, why completely interrupt the music/audiobook/whatever for this? I bought these specifically to use for playing drums along with music, so I now have to wait until I get past that 3-5 minute mark before I start practicing (it sucks when what you are playing along to just cuts out for a few seconds so someone can talk in your ear). I contacted the seller, and they suggested the usual (drain the battery completely, charge completely), and offered to replace them if I did not get a better result. When this proved to be the case, I contacted them and never received an answer. I suspect that this is a bug in the program and not a battery issue. To be fair, the sound is good, and they look great. The buttons are in an odd configuration that seems almost as if it is intended to confound someone operating it by touch alone -- angled buttons that look great -- but I don't see those when they are on my head, so unless I'm trying to impress someone, they should focus more on function than visual appeal. I will probably have to purchase something else when it comes to over-ear, bluetooth headphones. It's a shame that these didn't work out.

Second Update: While I thought the problem had been fixed with the new replacement phones, it turns out they are identical in every way, including the problem of the “battery medium” announcement minutes into each session. This is clearly a bug in the firmware that they are unable or unwilling to fix. Too bad, I think we are looking at a one-off product that will really not go anywhere.

Update: I made another attempt to reach customer service, and this time they responded immediately (they claimed to have not received my first communication). Upon hearing of the ongoing problem, they offered to replace the headphones. They provided a shipping label, but did not volunteer to send packaging. I returned the headphones and received a speedy replacement, which appears to be a properly functioning set of headphones. They still sound great, no annoying interruptions minutes after startup. Battery life is improved as well, although I have not put them through their paces on that count. I reluctantly give them 4 stars, due to the design flaws mentioned above.