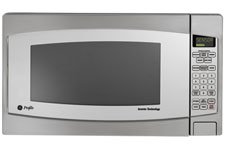 E. J. Tastad's review of this product is accurate and appropriate, but I would like to add some additional information. I bought this GE Profile microwave oven in March of 2006 on the recommendation of Consumer Reports. In September 2009 I am sorry to report that I had to throw it out because it wasn't worth repairing. Consumer Reports gave this GE model their top rating for large microwave ovens. It replaced an old Amana RadarRange that I had used for about 25 years before it burst into flames. The Amana had also received Consumer Reports top rating back then. If I recall, my Amana sold for about twice as much money (in 1981 dollars) as this GE costs in 2006 dollars.

Since this microwave oven is more powerful, faster and consumes more electricity than small models, you may need to have a dedicated 20 ampere outlet available for its use. Compared with my old Amana, the GE has a much more uniform distribution of heat when cooking or reheating, probably because the food is rotated on a turntable. As E. J. Tastad found, the defrost cycle is easy to use, gives good distribution of heat and the front panel controls are fairly intuitive. The stainless steel cabinet is attractive and easy to clean.

Unlike my old Amana, this oven cannot multi-task. For example, if you’re running the built-in clock timer, you cannot cook or reheat something on a different schedule using different functions. You must stop the clock timer to begin a cook cycle and vice versa. You also cannot program several sequences of automatic operations as my old Amana could accommodate, nor can you program it to start at a later time.

This microwave oven was not as reliable and did not last nearly as long as my old Amana did. The magnetron tube in my GE Profile microwave oven failed after two years of use. It’s replacement was covered by the five-year GE warranty on the tube, but the warranty didn’t cover the $85 in labor charges, which would have been even more if I had received the service on-site instead of taking the appliance to the appliance repair depot. After 3 1/2 years of use, (September 2009) the main circuit board self-destructed. It cost me $44 at the nearest GE repair facility to learn that it would cost me more than another $200 to replace the microwave oven’s circuit board.

Since other brands of similar-sized and power microwave ovens cost less than the repairs, I have discarded this microwave oven after 3 1/2 years and after spending $129 in diagnostic and repair charges in addition to the purchase price. Given this experience, I now be hard-pressed to recommend this appliance considering its cost-of-ownership and short life. This appliance should have lasted much longer. It did not get heavy use and was never misused or abused.

When I contacted GE about my failed microwave oven, they promised to make things right, asked for the model and serial number and requested that I cut off the appliance’s power cord and plug and send it to them. They then sent me a $100 rebate check that could be applied ONLY to another GE appliance purchase. The check expired before I found another GE appliance that I wanted to own.

I bought a replacement, which was a Panasonic model NN-SD978S microwave oven for less than $200 from Sam’s Club. It is just as large, cooks faster and has proven to be far more reliable. After four years, it’s still going strong without need for repairs.

until it broke. I purchased this microwave in September of 2007. I love the size, the features, everything about it. Unfortunately, it no longer heats up anything, making it a rather expensive timer and clock. I'm hoping GE will cover the repair. I suspect the problem is the magnetron. We'll see.