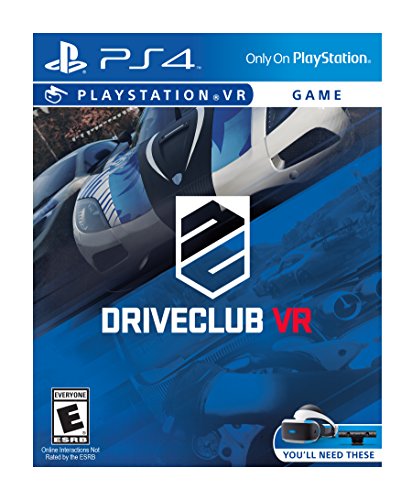 Amazon Review by A. Hong

You want an awesome immersive driving experience? Here ya go!

I want to give first impressions of the VR aspect of the game, and won't get into the full features of the game as I haven't had a chance to go through everything yet.

So as far as the VR immersion goes, it is excellent! Very much what I would expect for what VR can do for a driving game. At the time of this review, I’m also using a Thrustmaster T150 ForceFeedback wheel and a Playseat. I’ve had this setup before, playing Gran Tourismo on three 47"screen TVs, so I have at least some perspective in comparing how immersive the game is. With that, the immersion is definitely way better than having several big screen TVs.

You really do feel like you’re in the driver seat of the car you select, even moreso if you can setup a driving wheel. You can look full 360 degrees inside the car. I felt they did a great job with the vehicle’s interior as I felt like I was really inside an Audi, or a BMW, etc.With everything in 3D you get depth, which really adds to the driving experience. You’ll feel like you’re up close and personal with all the other cars on the road, and can better judge distance of the cars right next to you.

It is difficult to describe the experience with accuracy as it’s one of those things you really need to try in order to truly feel the immersion. If you’re a fan of driving games, I would strongly suggest getting a force feedback wheel and setup a comfortable seat just for the experience. If you already have a wheel and seat setup, then you know you’re trying to go for as much authentic gameplay and immersion as possible, and this VR version brings you as close as you can affordably get in your own home (for now).

Cons:
Now as good as the immersion is, there’s one thing keeping me from giving it 5 stars, unfortunately. That’s the graphics… they had to lower the resolution for this game, big time. I understand VR games will play at a lower resolution, but this kinda felt like I was playing a PS2 game. Very noticeable pixelation, jagged edges, and some blurriness in the details. It looks nothing like the detailed HD screenshots, Nothing! So please keep that in mind, so you’re not caught by too much surprise.

I don’t know if this is an issue with gaming hardware, or whether the developer rushed things out, because when I play EVE: Valkryie, even with their lower resolution, the details of the ships and environment were very nice… way better than the details in DriveClub. So all in all, the graphics were a disappointment.

With that said, if you can overlook the graphics, it’s an incredibly immersive experience as the VR integrates extremely well, and definitely worth it as one of the first VR driving games. I guarantee it will make for great entertainment during parties.

3D graffics were not good for VR game.

Purchased to get feel for VR game. Maybe picked wrong game for starter. (picked 2 games for starters) Neither was good choices.

I am a true gamer so I will give a concise opinion. The game in VR is excellent. When you spin out it just like spinning out in a car. Your disoriented and once you get your bearings. You peeling off to get back in the race.

Another plus is looking into your rear-view mirror and seeing the cars position’s behind you.

Since you can see the racers behind you in rear-view an option should be available to adjust your rear-view mirror.

Graphically the game can look better but I am not playing on a PS4-PRO so perhaps the game will look better if I upgrade the system.

The game will feel even better with a driving wheel which means more money. Currently on sale during black Friday is the Logitech steering wheel marked half off I suggest you get it (retail is $400 and currently $200). There is thrustmaster driving wheel is available for $200 but it don’t have have clutch. You don’t need a clutch for this game but if you want the option. Logitech is the way to go.

If you have any questions just comment on my review and I will be alerted by email and I will respond.