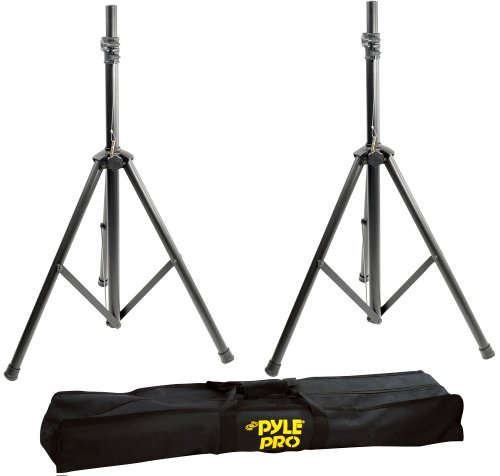 Using my tripod for my projector

I needed an alternative to mounting my projector; I didn't want to mount it to the ceiling and wall mount was out of the question (see my pic above). After much price comparisons and searching, I settled upon the Pyle PSTND2. IMO, it's well worth the money. The tripod is built very well and it's strong and sturdy. I bought mine from another site for $8 cheaper than here and the total with shipping was around $33. If you're looking for a tripod, doesn't hesitate on this one. You'll find similar styles that cost $20 to $100 more than this but I bet you they're made by the same company in China.

As a side bar, I was going to mount my projector to my old camera tripod. I bought a 6’ aluminum extension pipe/bar and the ODYSSEY LATSA1 mounting hardware to go along with it. The aluminum bar ended up being too big to fit in the camera tripod and the ODYSSEY LATSA1 was too big for the aluminum bar! I ended up scrapping that project and bought the PSTND2 to go along with the LATSA1. I’m really glad that I went with the PSTND2 as it’s very sturdy and BIG, unlike that camera tripod I was going to use. That thing would have tipped over had I used it. I really don’t have to worry with the PSTND2 tipping, unless my cat gets crazy and tries to use it as a scratching post (she better not!).