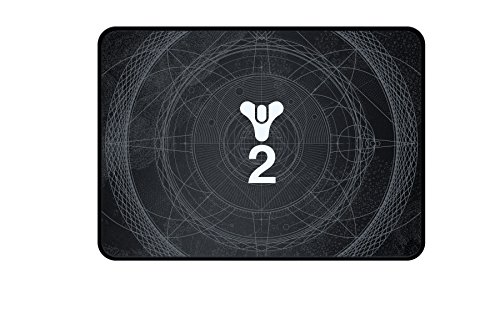 In between Goliathus Speed and Control - FPS Veteran

My only real issue with this pad is the raised logo, meaning the mouse can hit it.

I know it’s huge and probably won’t ever get in the way, but that’s not the point… don’t even RISK hindering my mouse movement. Ever.
Regards, Every Serious FPS Player

Thankfully due to the size, it’s fairly easy to avoid, and it has a lot of positives.

The rubberized hexagonal patterned base grips the desk well, so it didn’t slide around.
The surface is somewhere in between a Goliathus Speed and Control, but feels smooth like a Speed, which is something I’ve really wanted to try lately (and so far it’s great).
The size is awesome, if you have the desk space.
Smooth, soft stitched edges, no irritation on my skin.
And most optical sensors track as well as they can on it (laser sensors, not so much).

You can get a plain black version from Razer, but otherwise the logo is green - which is a negative in my opinion.
“Hi, we’re going to Chroma everything, now let us dictate the color scheme by putting green on the pad”.

Not a big deal, but… that’s two rookie mistakes.

Otherwise, I love it, great pad, hope they fix those couple of things in the next version.