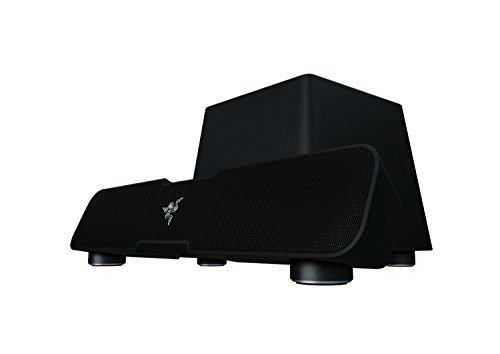 I was looking for a something to replace my Logitech Z323s which were having a little issues on the left side speakers, Razer has done me well before so I gave their soundbar a shot and I can say I'm utterly pleased.

The packaging is a little poor for Razer, but I wouldn’t expect them to go all out with such a big box. On the inside you get the typical “Welcome to the cult of Razer” letter, instructions and stickers that you get with all of their products nice an snug between cardboard packaging making it simple to pull everything out even if you’re left with a lot of crap to through out but oh well. The soundbar is also in a cloth pouch which is nice I suppose. A+ here Razer.

Setting it up couldn’t be easier, all cables run to the soundbar with a single cable running from the subwoofer which is nice if you like keeping your set-up looking cable free and clean. All cables you’d possibly need are included as well, so you don’t have to worry about picking up an Optical Cable or anything. You’re also given two sets of feet for the soundbar so you can raise and angle it however you please for your aesthetic or aural preferences. Once you’re done plugging it all in, hit the power button and you’re ready to rock.

I currently have the soundbar acting as a speaker for my PC (via 3.5 jack) and to replace the aging, terrible speakers on my TV (via Optical) which have begun to rattle. Oh, I also have my phone hooked up via Bluetooth but more on that later. The sound, is awesome. These sound better than my previous speakers and they can get ear-harmingly loud if that’s your thing and you won’t hear any rattling or peaking. The subwoofer booms and is perfect for games and movies. Sadly, there’s no EQ, instead you get a button that’ll toggle between 3 different modes: game, music and movies each being represented by a green icon that glows when you switch between them. So if you want further EQ control you’ll be doing that software-side. All buttons are hidden behind bar except for the power button so it keeps the look simple though it can make it a little annoying adjust volume, change the EQ presets and whatnot.

My only complaint is the device will shut off by itself after 10 or 15 minutes if there is no sound going to it, whichch would seem like a nice feature but if you’re just doing some browsing online that time goes by quick. I find myself turning it back on more often than I’d like. It’s really dumb and I have no idea why they included this or didn’t give an option to disable it.

Over all I’d definitely recommend the Razer Leviathan, I wouldn’t doubt if you can find a product that sounds equally as good for less of a price but you will be getting a good product with fantastic sound.

When reading the reviews for this I was skeptical about dropping this much money for PC speakers given the other options out there. Part of the reason was that there are reviews that brought down the overall user ratings because people were using these for the TVs, not for their intended use as PC speakers. If you are looking for great sounding, loud, clear PC speakers with Bluetooth capability, look no further. If you are looking for a sound bar set up for your TV, I'll state the obvious here: GET SPEAKERS DESIGNED FOR USE WITH TVs INSTEAD OF PCs. These speakers are incredible for a PC set up. They're loud, clear, easy to set up and use. I've used them for both gaming and music and have been nothing short of amazed by the sound quality and overall build quality. The bass is NOT AT ALL too loud and the lack of volume/gain adjustment for the subwoofer itself isn't at all an issue because it is adjusted perfectly and reacts dynamically to all 3 EQ presets accordingly. If you're gaming, use the gaming preset, listening to music, use the music preset and for movies, there's a preset for that as well. All 3 work amazingly well and I've found no need for any further fiddling with the sound beyond that. I consider myself an audiophile and have a couple decades worth of experience with different sound applications ranging from full home audio, car audio and PC audio. Even without a sound card in my gaming PC, these speakers are nothing short of impressive and well worth the money.