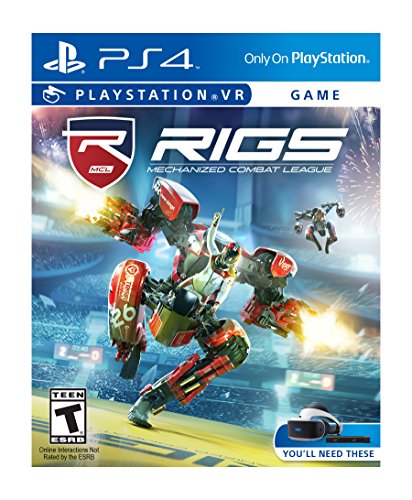 A Must Have for all PS VR owners - seriously, stop reading and buy this now!

This game is amazing! It truly is the best VR game I've played so far. I picked up the bundle, so I got VR Worlds, and I also picked up Battlezone, Rigs, and Eve Valkyrie. Rigs is the best of the bunch! It truly gives that feeling of being in a sport league, and the graphics are spectacular. It's only 3v3, but the gameplay is fast paced and the arenas are small enough that you are never really wanting more players. IE, there's always a target nearby for you to kill :)

The only down side right now that I am experiencing is that lack of human players when playing online. The majority of my matches are only 1v1 humans and the rest are bots. Unfortunately, the bots are skilled differently too - one round, they can kick arse and the next they get zero’s, not sure why that is. If you’re better than your opponent then it likely won’t matter that much - but if you’re evenly matched, they’ll play a critical role.

I also noticed that at the beginning of the match the bots don’t fire back at times. Perhaps it’s a bug.

Outside of that, it’s an awesome game that I highly recommend for anyone with a PS VR. Note that many users have difficulty not becoming nauseated playing. It apparently takes a little while to get used to. I haven’t had the issue, but I’ve never gotten the motion sickness either. I’ve disabled all “VR Comfort” settings without any problems.

If you have found this review helpful, please click on the little Helpful button below. It’s anonymous!

I love the game and feel i can actually stand up and dance if I want to. It really goes to the hard mode when it goes to round3

RIGS is about to become a big franchise. Mark my words.

It’s a game I had put down initially as it made me nauseous.
But in VR, the trick is to power through the discomfort to raise your tolerance. Take brakes, get back to it, do not give up.

Once comfortable with the game you will be blown away by its strategical depth and replay value. The game has multiple types of play and makes you alternate between league, championships/cups.
As you gain fame you are faced with new sponsorships (think of them as challenges) and new rigs to purchase.
Your team members can be contracted as well, the more you pay the better the hire.