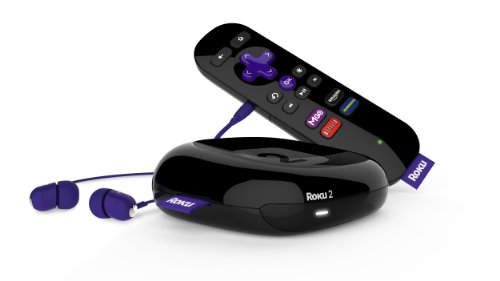 On April 6, 2015 Roku updated the Roku 2 and Roku 3. The new Roku 2 is basically the old Roku 3 - but they removed a couple of features. The new Roku 2 is IR only - no more wifi-direct remote so you need line of sight now and no headphone jack in the remote. The Roku 2 is also HDMI only - it WILL NOT work with a CRT TV. I have no idea if Amazon is going to start transparently selling the new Roku 2 if you buy from this page or if this will continue to be the product page for the “older” Roku 2. The older Roku 2 has a model number of 2720R and apparently the new one is 4210R.

It looks like the only “current” Roku that will work with a CRT TV is the Roku 1, which (as far as I can tell) is just slower than the “new” Roku 2 but still has composite video output.

I’m going to leave my original review in place and write a new one when I get the new products. For now if you can get the “old” Roku 2 it’s still a great product, but I’d now say that the new Roku 3 is a better deal than the new Roku 2. The IR-only remote is a deal breaker for me - I love being able to hide these devices out of sight.

I’ve had a Roku 3 hooked up to my living room TV, a streaming stick in my bedroom, and a Roku 2 in the guest room for a while now so I thought I’d do a comparison between the devices. I keep this review up to date as new devices are released or major content changes occur (such as YouTube support).

First here is where they differ:

–Roku 2–
HDMI and composite outputs so it can be used with a new HDTV or an older standard definition TV
The processor is about 1/5 the speed of the Roku 3 - this is only noticeable in the menu system as there is just a small amount of lag but I only notice it when comparing it side-by-side with my Roku 3. It still works just fine and handles even the Super HD Netflix content without a hitch
No motion remote - this only really matters if you use the remote to play games on the Roku. Most people won’t miss it
Wi-fi only - No ethernet jack so that there’s room for both HDMI and composite outputs. If you don’t have a wireless network I will look at you funny
The headphones that come with the Roku 2 remind me of Apple’s old headphones only purple - they hurt my ears in the same way (if a free pair of crappy headphones is a deal breaker I recommend you straighten out your priorities)

–Roku Streaming Stick–
HDMI-only
Wi-fi only - it’s pretty small so there’s just no room for anything but the HDMI port
USB powered - depending on your TV it may be possible to power the streaming stick off the USB port that can be found on many TVs. It also includes an AC adapter. It uses a standard mini-USB port so if the included USB cable is too short you don’t need to get a special cable
Support for multiple Netflix profiles (just like the Roku 3)
NO headphone jack in the remote (the 2 and 3 both have headphone jacks in the included remote that can be used for listening to whatever is currently streaming through the device - I haven’t tested if the headphone remotes will give the headphone functionality to the streaming stick if they’re paired with it)
One con I’ve found with the stick is that it IS noticeably slower than my Roku 3. You’ve got to learn a bit of patience with it - it’s especially sluggish when navigating through Netflix, but the slowness is even noticeable when using the main device menu. It still plays everything in 1080p just fine, but navigating to the content can be a bit slow compared to the Roku 3 (at twice the price).

Here is where they are the same:

Wi-fi direct remote - the remote is NOT Bluetooth. It uses a technology called Wifi direct which is why you may occasionally see a weird wireless network called “Roku-something something”. The wifi direct remote is very low power and is extremely responsive
The headphone jack in the remote works wonderfully and the sound is fantastic (no headphone jack on the streaming stick - only the 2 and 3)
Streaming media - Everything looks great. The Roku 2 has a slower processor than the 3, but it doesn’t suffer from any problems playing back HD content streaming over the internet. The Roku 2 and Streaming Stick can handle everything that the 3 can do and for $20 or $50 less, respectively - the stick does suffer from some lag when navigating menus, but it plays all HD content with no problems at all.
Dual-band (2.4 Ghz and 5 Ghz) wireless

The Roku 2 is a great streaming device. If you absolutely MUST have a wired network jack get the Roku 3. If you MUST play Angry Birds on your TV get a Roku 3. If you don’t need any of the Roku 3 exclusives you won’t go wrong with the Roku 2. I probably like my Roku 3 just a bit more - so if you can find the Roku 3 on sale, or the $30 difference in price isn’t a big deal go ahead and get the 3. If you want to save a little money the Roku 2 is great and you shouldn’t feel like you’re getting a “lesser” device. The Roku 2 is also the ONLY current Roku that can be used with a TV that doesn’t have HDMI (pretty much any non-HDTV).

If price is really a big deal give the Roku Streaming Stick a look. It’s got almost all the same features as the 3 but for half the price (it’s usually $49). The only differences between the stick and the 3 is that the stick is wifi only, it doesn’t have a headphone jack in the remote and it has a slower processor. Get the 2 for a non-HDTV, get the 3 for the Cadillac of Roku devices, get the stick for an HDTV to get most of the Cadillac features at the Chevrolet price. Make sure you’ve got good wifi though. Since the streaming stick is stuck directly to the back of your TV there’s a potential for the TV to cause a lot of interference with the wifi signal reaching the device. You can get HDMI extension cables (it has to be an extension, a standard HDMI cable won’t work) that would allow you to move it around, but you could find yourself eating up the money you saved on the stick pretty quickly when you start spending money on things like that.

Also - get the iPhone/Android Roku app. It makes for a great additional remote for the devices and allows you to type using a normal keyboard instead of having to use the D-Pad to select individual letters if you’re searching for something on Netflix or Hulu or logging into a service.

NOTE: I would recommend either the 2, 3, or stick over the Roku 1 for one simple reason - the remote. The Roku 1 has an IR remote which means you MUST have line-of-sight to control the Roku. The wifi direct remote allows you to hide the Roku so you don’t have yet another little box on a shelf in your entertainment system and you don’t have to worry about your dog/child/passing wildebeest standing in front of you and preventing you from pausing that episode of Breaking Bad you were streaming off of Netflix.

I purchased Vizio Co-star mainly because I like their televisions. Owned it for about 4 months before It finally gave out. It was slow, clunky, would freeze up weekly, and with a remote that was really hard to deal with (hundereds of buttons, and laid out strange). Feb 2014 was when I purchased this Roku, and for less money than the Vizio. What a difference! First thing I noticed was the simple remote. Around 10 buttons, including the earphone remote volume/control. 2nd thing...this Roku is fast! And has perfect video quality! 3rd thing...Everything about the RoKu is better, faster, easier, I really don't know where to stop! And, with the Roku, I have so many more choices (more channels, including free channels) than with the Vizio. If you are new to streaming boxes, Roku is the one for you. And if like me, you had a terrible time with a Vizio Co-star, you will Love the Roku. Now, there could be other really good products out there. But if you are deciding between a Vizio Co-star and a Roku, Go Roku! Go. GO!

@liesbeth Did you buy it?