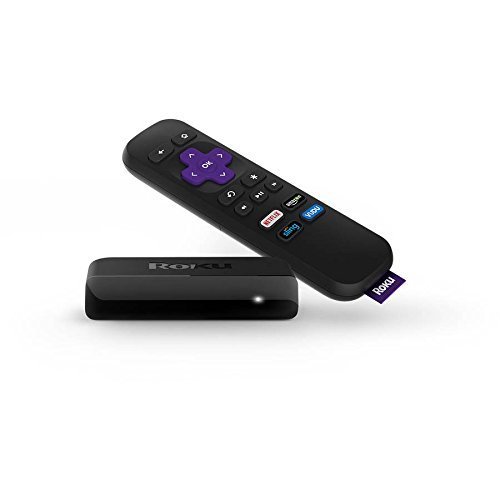 I am a pretty hardcore Roku fan, having bought 15 of their streaming devices for myself, family and friends over the past 2 or 3 years. I bought the Express+ on Black Friday at Wal-Mart for $25 and, unfortunately, decided to return the unit less than 48 hours later and buy another Roku Streaming Stick (3600R) on Amazon.

My main reason in purchasing the Express+ (or even an Express for that matter) was that I wanted a Roku that came with an IR remote, thus working with IR universal remotes such as GE, RCA, Logitech Harmony and most other all-in-one IR remotes. Not all, but most Roku devices now utilize RF remote transmission, which I do prefer, but unfortunately won’t work with 99% of the universal remotes sold, unless you spend $300 for a remote that offers both IR and RF.

I currently have a Roku Streaming Stick (the newer 3600R) on this TV and love the performance, and I knew I’d likely lose some processing power with the Express+. While the remote and menu/user interface speed was OK, Netflix never streamed beyond 720p (after taking considerable time to get there) while the Roku Streaming Stick hits 1080p in a matter of seconds. I also experienced the old 25% buffer issue with Netflix where it would stick at “25%” and never budge beyond that point unless I restarted the Express+, then it would stick again after just a couple of Netflix viewing selection changes.

Bottom line, unless you need the Express+ to connect to an older Television with no HDMI inputs, spend just a few bucks more and purchase the newer Roku Streaming Stick (3600R), by far the best streaming device on the market for the money. It’s fast, it’s powerful, it’s small, it’s simple to use, it’s dual band, and most importantly, it performs. With the vast difference in streaming performance I can easily live with two remotes for the foreseeable future.

Works great, even on road trips

We received this about a month ago as a gift. I was going to return it for a Roku stick or higher up box. But my wife opened it before I did.

While it lacks the ability to add Kodi, it does work great for entertaining the kids on road trips. Our SUV has an added wifi hotspot and we streamed Netflix to the overhead DVD player.

My only complaint was it used a lot of data even at 480p resolution. So it’s not for everyday use as a mobile device. (however I have not taken the time to see if there is a “low data use” checkbox.

The best part is I can leave the RCA cable in the truck with a micro USB 2.1A( must be 1.0A or larger to power the device…also would not power from the 500mA port on our TV, I had to use the included AC adapter) …and then leave the AC adapter and HDMI cable connected to the living room TV.