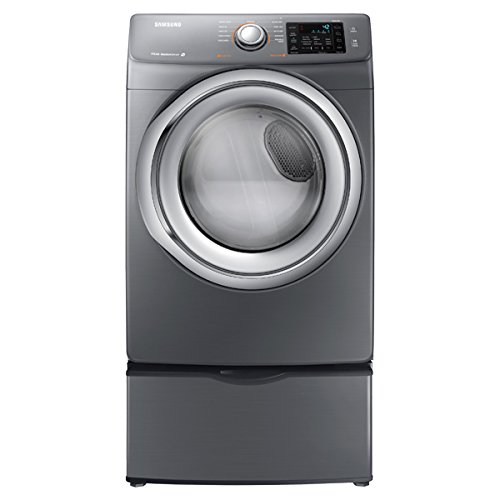 Great size, beautiful color. Nice options, more than we or most would use. Still can't wait to try steam cycle. Getting ready to install not as fun. Stacking assembly stinks for someone with limited space as it requires a deeper depth by staggering the dryer on the washer (check out the stacking kit first). Door on both washer and dryer stick a little. Had to switch the door around for our use but not hard to do. New so we will see how well it works.

So far, so good

I bought this 4 months ago. My wife and I really like it for the most part. We have them stacked with the dryer on top. It has good features, but that is where it stops. I now regret purchasing it.

It died on us after only 4 months. I hit the power button and it lit up and then the lights went off and never came back on again. Dead. Turns out the main and secondary control board is broken. This is not even a wear item!

2 chat sessions and 3 phone calls. Honestly, I will never buy a Samsung appliance again. They customer service is awful. They are really bad at training their employees, every time I called I received a different answer.

After the first phone call they said they were going to file a repair claim. Then they called an hour later, which I missed and they sent me an email. The email had a link to check to make sure it was plugged in and it had power. At the bottom of the email it said the claim was being closed. Are you serious! They were going to close the claim without even knowing if it fixed.

Every time I called I gave them the claim number, and they never read any of the notes from the previous discussions. I had to repeat myself every time. I have spent about 2 hours on the phone with them. At the end of the last phone call the had written down the wrong issue, the wrote that it wouldn’t turn off.

Finally I got a service company to contact me, and they were rude. They told me I would have to unstack the washer and dryer or they wouldn’t come out. So they expect me to lift a dryer off the washer and do their job. When they installed it they stacked it. I was then told to hire a moving company to do it. WOW.

So as of right now I am waiting for different repair company to call me to schedule a repair and we are running out of cloths and having to line dry everything. I will try to update if it gets repaired.

The first company that was going to perform the repairs was a D rated company by the BBB. The 2nd company has 14 reviews and 75% of them are terrible.

I am a contractor and I am telling all my clients and friends to avoid Samsung appliances. They should stick to TVs and phones. We are renovating our kitchen soon and will not be buying and Samsung appliances and my friend is now canceling his order for his new kitchen.