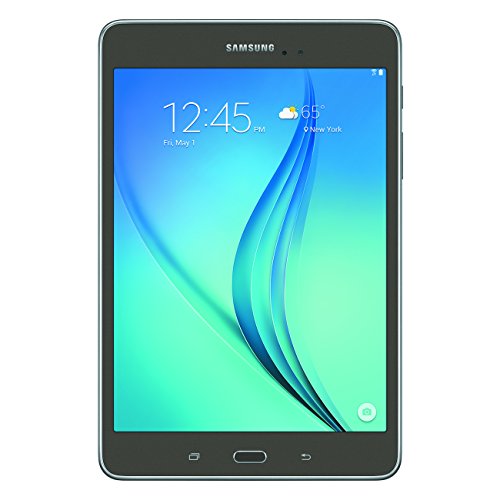 Absolutely Love It To The Max

I am I huge Samsung fan, but I didn't let that cloud my judgement or stop me from doing Lots of research on tablets before I ordered one. Me and my nine year old daughter both have gone through two tablets each, that's four tablets, in less than two years. All were $125 or less but didn't expect then to only last a year. I don't mind paying good money for a good product that's gonna last and believe be this better be the last tablet I have to buy, atleast for a while any ways. I just don't have anything bad to say about the Samsung Galaxy Tab A. It has everything you want and need in a tablet and can take a 128gb SD card. I bought one for my daughter for Christmas and she loved it so much that I just had to buy myself one too, my tablet still had to be replaced anyways. I have used it everyday since and I truly love it, I knew Samsung wouldn't let me down. I would recommend this tablet and you'll be glad you did, it's not over priced and is just as good if not better than the more expensive ones. I Lve My Samsung Galaxy Tab A!

I own both the models of Galaxy Tab A 9.7 and 8.0 in our household and the Tab A 8.0 is the one I use personally all them time mainly because of its compact size which is great for one handed use and a sharper screen . I purchased the Tab A 8.0 after deliberating considerably whether to go for the Tab A 8.0 or the newer Tab E . In the end I choose the Tab A because if felt much more premium in hands compared to the Tab E. Here's how I feel these both the Tab A 9.7 & 8.0 tablets stack up against each other if you're considering either of the two :

THE NOT SO GOOD

FINAL THOUGHTS
Overall I really like the Tab A 8.0 (over our Tab A 9.7) and can highly recommend it to you as you get a great form factor , decent screen resolution and performance with bright vivid colors and expandable storage all for under a $150 price tag. In fact i still choose this tablet over heavily discounted Ipad Mini during Black Friday 2016 as I felt it fulfilled my requirements sufficiently and gave more bang for my buck

Unless you're elite gamer, GO BUY IT!

I bought this mainly to play Android Games on, and I do a little Google searching. I have an older Samsung Note tablet that is a powerhog and kills the battery in 57 minutes, up to 1 hour 11 minutes, so I decided that I needed battery stamina in the new tablet. This uses the Smart Manager, like what my S6 phone does, that limits background app battery usage, and I'm not sure how well that works, and I'm not sure it's even necessary for me.

I have the screen brightness at around 1/4 of the way up, as I do with just about every tablet I’ve ever used, my laptop, everything. I play Clash of Clans, Boom Beach (got pulled into those via the kids), Real Racing 3, Airborne 8, and Crossy Road mainly, but I’ve got half a dozen other games installed that I play too. So they’re not top of the end games, but my old tablet died in an hour playing them. It looks great doing it, but it simply dies way too fast.

Last night, at 26% battery remaining, this tablet informed me it had been on for 28 HOURS!!! So, if you want battery life, this is it. This has the longest battery life of any tablet I’ve ever used, and I’ve went from the “overseas” junk up to the top end Samsungs… I am impressed.

The video isn’t top of the line, however on an 8" screen, unless you sit this tablet next to the Note2, it’s tough to tell the difference. The games play fine, with minimal lag on startup on Airborne, but it’s an issue of their ad coming on with the initial home screen IMO. The screen is NOT bad, has a good viewing angle, is bright, has good color. It may not be a 4k screen, but who REALLY needs that? If you want to pay $600 for a tablet, fine, but for me, under $200, and cheaper than that on sale, it does the job, and does it well. It is the clear “bang for the buck” champion.

Stop reading, and start ordering, you won’t be disappointed!