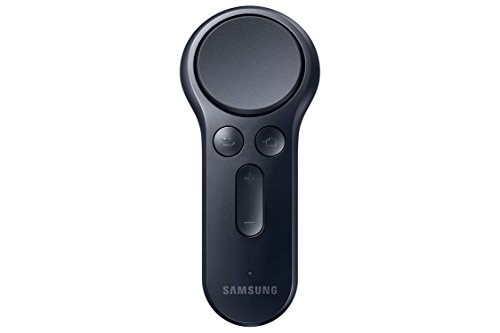 If you have the 2016 model headset (2016 Black version) it does work. you have to go to the VR app, then go to "more" and then "controllers". From there is where you pair the controller to the Vr software. Just make sure you update the software first

Takes Gear VR to another level!

I'll start by saying that this controller is a must-have for Gear VR owners. If you were on the fence about getting a Gear VR, then this controller will more than make it worth your while. Now here's a more detailed breakdown..

The Good: This controller makes navigating through menus much more convenient since it acts like a laser pointer or wii remote. Having virtual models of the controller or what it represents in a game is also super cool. Games that use the controller are made much the better for it, as the natural “point and shoot” mechanics feel so immersive, and there are new apps arriving pretty much daily.

The Bad: There is no positional tracking of the controller, only rotational and tilt tracking. Also there is no vibration at all to simulate actions in VR (i.e. shooting a gun). Together, these limit the final immersive feeling of the VR controller. The batteries are also not rechargeable, which I would normally expect from an official Samsung accessory. Finally, you will have to recenter your controller a lot in-app, but it’s a single button press process, so you can pretty much ignore this problem.

Final Verdict: (See above) Although this controller is not perfect, I’d rate it a 10/10 for what it is, and the fact that mobile VR is still a new and limited technology at the moment. For $40 this is a no-brainer purchase

All around a good product

Please make it so we can calibrate the controller while wearing the gear vr also it just doesn't feel natural with the limited amount of movement ,I don't understand how the Nintendo switch could get perfect motion and like 10 other buttons on their controller ,the controller should have full movement with my arm up down sideways everyway instead of this laser pointer style