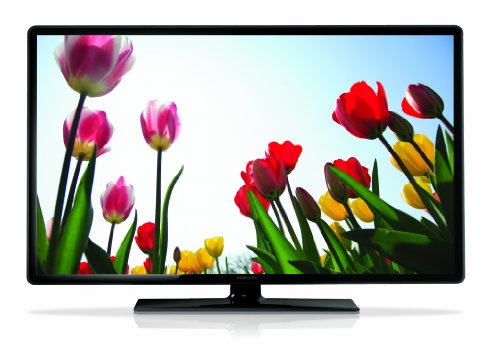 @liesbeth Did you buy it?

Amazon Review by tired of bats

great tv with some excellent features

I bought this tv for an exercise room and hoped the speaker volume would be enough to overcome the treadmill noise. Not only was it loud enough but the tv has a setting in the sound menu called Clear Voice that emphasizes voice over sounds. This makes it much easier to understand what people are saying while on the treadmill. It also has a setting called Auto Volume that automatically adjusts the volume to the same level on all channels. I am using the tv with a small roof top antenna and it gets all the stations from a 56 mile distance. I compared this tv's channel reception to my more expensive Toshiba Regza 46XV645U and they were both the same, so my worries of a cheap tv having an inferior tuner were over. The base of the tv is not adjustable but was quite sturdy and level. The back has a 75mm by 75mm vesa mount so it could be mounted with something like this mount:

I mounted this tv up high and used a feature in the picture menu called Samsung Magic Angle. This has settings to adjust the picture quality to compensate for the tv not being close to level line of sight. This brought the picture back to the same quality as if I were looking at it straight on. This feature could also be used if the tv were mounted real low.

The quality, picture, and sound of this tv were above my expectations for a tv at this price.

Update:
After 1 year the tv is still going strong with no issues. I am very happy with this purchase.

Just what I needed

Perfect for the kitchen counter. Small footprint takes up less space than other brands. Set up was a snap