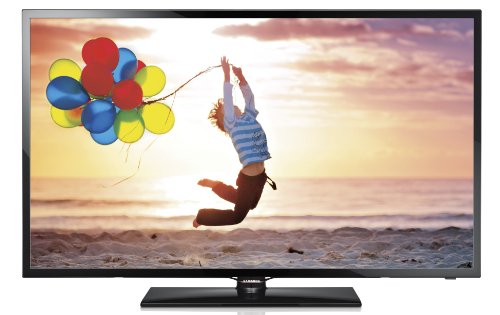 I was ready to purchase the `12 model year Samsung 5000 series TV when I found out that this updated model was available. My local big box stores did not have the F5000 series in stock yet so I had to take a chance on this set and buy it sight unseen.

I would rate myself as a fairly knowledgeable user, and a very picky one at that. I read AV forums online and I constantly tinker with my TVs to get the best picture possible out of them. I am very glad that I waited to get this new '13 model, as the quality and features are substantially improved.

For starters, comparing this model side by side with the older Samsung EH5000 models, the first thing you will notice is how much thinner the F5000 is. At 1.9" thick, it’s almost as thin as any LCD TV gets; and its roughly half as thick as the prior model. The 2" difference really matters, especially for those of you who will be wall mounting the TV. With a low profile mount, the TV is about as flat as one could expect to get.

Appearance-wise, the F5000 is a stunning looking TV. The bezel is ultra-thin and glossy black. The bezel bows down slightly in the bottom center of the TV to show off the Samsung logo. Compared to another same size Samsung LCD in our house that is just three years older, the F5000 looks futuristic and sleek. I love the design direction that they have taken in 2013.

But all this means nothing if the TV isn’t just as fantastic from a performance standpoint. Luckily, the function is well matched to the form.

The first thing I checked after getting my TV mounted to the wall was the evenness of the backlight. Our previous non-LED Samsung had a slight “flashlight” effect to it. When looking at an all black screen, you could see noticeable bright spots, especially near the corners. My F5000 set, however, appears to be perfectly even from edge to edge. Very impressive considering this is one of their lower end lines.

The picture on the TV is excellent. I’m not sure how they achieved it, but considering its only a 60hz panel, the motion is the smoothest I have seen to date. No perceptible blur during fast action on the few shows I’ve watched so far. Like all other LED TVs, the factory settings have the backlight set too bright and the red level pushed too hard, which makes skin tones appear slightly too unnatural. This is a quick and easy fix in the video settings menu. I’ve only had the set a short while and am still making adjustments to my settings; I will update this review shortly with a full list of the optimum picture adjustments. But even without a single adjustment, I am just very shocked at how stunning the picture is. Also, I was expecting to immediately disable the “eco” features of the TV, but I surprisingly fell in love with one of them. It has a built in sensor that measures the brightness of your room, and adjusts the backlight accordingly. I had my mind set on disabling this right away, but after trying it out, it’s actually very well implemented. It is especially useful for anyone using this TV in a bedroom… If you want to lay in bed and watch some TV in the dark, it will dim the picture slightly and keep it from being uncomfortably bright. If I wasn’t using it in a bedroom, I’d probably want to disable it. Thankfully, its very easy to access the eco settings to adjust or disable it for those of you who don’t care to try it.

Right now, I can only think of two Cons to go against the many pros, and they are both minor. The first con is that the backlit remote is very very dimly lit. Even with the backlight activated, it takes a second or two to figure out what each button is. Thankfully though, this becomes a non-factor once you’ve used it a few times and have the locations memorized. The second con is that the included stand, at least on my 32", is very cheaply made. Samsung clearly has done some serious cost saving on the quality of the stand. Although they managed to make it look OK, the feel of it is terrible. It’s a very thin gauge of reinforced plastic. This isn’t an issue for anyone who is wall mounting like myself, but I felt it was worth mentioning. It feels significantly less sturdy than all previous Samsung TV stands that I have owned.

One last thing I’ll note for those looking to wall mount. Some descriptions list the 32" version as being VESA 400x400. This is INCORRECT. I can confirm for sure that it is VESA 200x200 for the UN32F5000. The Samsung manual will confirm this, but as of the time of me writing this review, Amazon lists it at 400x400 which is very wrong.

Overall, the F5000 series feels like a big step in the right direction for Samsung, and I am thrilled with the TV so far. I will update this review in the near future with my recommended picture settings once I get them dialed in exactly as I want them.

As promised here are the best picture settings I have tried for this set. Courtesy of user Maverickaim9 from AVSforums:

Everything else 0 or off

My set is a few months old at this point, still zero problems with it and we are absolutely loving it. I’ve been trying to respond to the comments posted. Let me know if you all need anything else clarified in my review.

I bought for my son's room, it's a nice small size, fits on a small desk nicely. This TV does it all. Works great as a PC display, great for gaming, and the digital TV tuner pulls in all the over the air channels A-OK. As a bonus, you can plug in a USB flash drive and play music / videos / photos with common PC files - no fancy conversion required like with Apple products.

The only con is the the TV stand, it provides no tilt support which would be nice when using as a PC display. There are some display settings that can be used to compensate for no tilt, but a nicer stand would be better. There is mounting support (4 screw holes) on the back, so I’m considering attaching it to the wall with a bracket with tilt support.