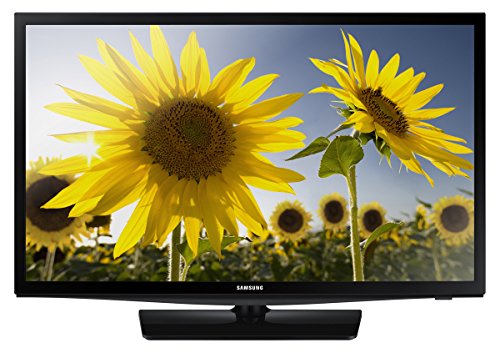 This TV so far is wonderful. I needed a new one in the bedroom and this one was the right size and the right price. We have another Samsung tv in the den also. Picture clarity, color sound, all are wonderful. This TV is also receiving channels over the air. It picked up more than the other one did. Antenna is inside not outside and TV does a very good job receiving the channels. If I needed another TV, o would buy this one again. I also recommend this TV I ordered it to pick up at Walmart and it came in a timely manner and in good condition.

Great Samsung TV for the Price

This a great TV here are the reasons why

Good:
This TV has great color and is very clear. You do need a digital antenna if your not planning to hook the TV up to FiOS or Cable. The TV comes with a remote that lights up in the dark which is very useful. Out of the box this Samsung TV doesn’t need much color correcting or configuring. Another great thing is this Samsung TV has a thin black bezel around the screen. Which is good because it makes the TV screen look bigger then 23.6 inch screen size listed on the box. This is a HD 720p which is very good for DVD’s saw no lag or screen dithering. Also there screen mode that are very good to give different contrast and color options for watching movies, playing games, watching TV and watching online content. You can use this TV as a monitor but make sure to use the HDMI input to hook up to your computer.

Not so good:
Wish this Samsung TV had more inputs in the back of the TV. Only has one HDMI input. So if you plan to hook this TV up to a cable box, game console or and other HDMI device you will need a splitter. The speaker are not loud enough. There good but not great. You need a powerful digital antenna. If you purchase a low cost indoor digital antenna you may not receive as many HD stations you thought you get. Last not so good thing is the base of the TV is hard to install. You will struggle to connect the base of the TV to the top part. There are three screws that need to dropped down a inch and screwed in. Big tip get a magnetized screw driver because if you use a regular one it will take you a while to screw in all three screws trust me!

I don't have time to write a lot of reviews. When I do, it's either because I'm really pleased or really peaved about a purchase. In this case, I just have to put my two cents in about this TV, and Samsung TVs in general.

Picture Quality
We have several LCD / LEDs in the house, both Sonys and Samsungs (including this one - the UN28H4000). The picture quality of all of them is beyond amazing with sharp lines, vibrant colors and deep blacks. All are great for viewing everything from the news to football games. I’m not really a “gamer”, but they all seem to display the action from my Xbox nicely too.

Sound Quality
Where Samsung separates itself is in the sound in these smaller TVs. With a big screen, you’re almost sure to want to combine it with some kind of separate sound system (surround, sound bar, etc.). But darn it, I didn’t want to HAVE to buy a separate sound system for a small TV that’s going in the kitchen. Samsung is the only brand I’ve found that comes with adequate speakers, which seem to be full-range as opposed to most others which emit treble and mids only. I wouldn’t say this Samsung sounds “great” (we do have both a Bose surround system and a Sonos sound bar in the house). But it has a nice full sound that’s certainly better than good enough for watching - and listening to - whatever show we’re interested in while having dinner or a midnight snack. All the other brands I’ve heard sound like overdriven headphones when turned up beyond a whisper, and that includes Sony, LG, Visio and Toshiba.

True, this TV is not a “smart” TV. You won’t be streaming Netflix or your favorite TV from Amazon without a secondary device. But it doesn’t - as others have stated - claim to be a smart TV in this ad, and that’s not what I was after (however, in defense of those other reviewers, it does show up as a smart TV in a comparison table I found here on Amazon, and that is incorrect). So for what it is, I give it 5 stars!