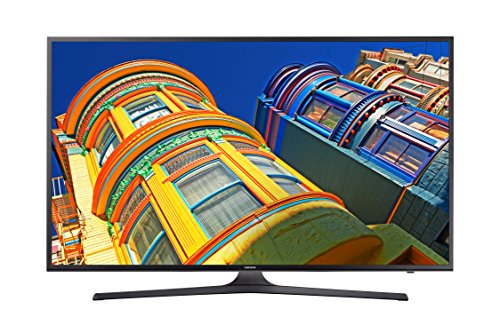 Amazon Review by Flea on a Drum

I had been keeping an eye out for a good sale on a decent 4k TV for a few months. I need the 4k display primarily so I can monitor 4k content when I'm editing. But I also wanted smart TV features so I could enjoy streaming content in my office without needing a cable connection/box.

Originally I bought a 40" LG unit that I bought spur of the moment. It didn’t compare at all with the 4k images I’ve seen on the pro-level 4k monitors at work. It ends up that the entry level LG units utilize a RGBW pixel structure (red-green-blue-white). That’s why the image didn’t look sharp enough but it was fairly bright. Every 4th pixel is simply making the image brighter but adds no image detail. I also realized that 40" wasn’t sufficient for my needs.

The KU6300 series (KU6290) Samsung’s reviewed well and looked great when I checked them out in person. They still aren’t at the pro level, and they aren’t that bright, but they are amazing for the money. The higher-end models seemed identical to pro-level monitors, and they are bright enough to really give you true HDR performance. But they are much more money and I won’t spend that much on technology that’s changing so fast.

The KU6300 is the right TV right now for very little money if you get a sale. It has a wide viewing angle. The smart features work better than any TV I’ve used. I love how fast the TV turns on and that it brings you back to where you were last viewing (even if you were using an app). The sound is good for built-in speakers. Using the right settings, you can send a 12-bit signal from a PC video card, but the TV’s panel is only 10-bit. So the resulting image does have some noticeable banding in color gradients. But most people won’t notice this.

I can’t comment on all the gimmicky features like “smooth motion” and other things that generally make the image worse, not better. The first thing I do when I get a new TV is to turn all that stuff off and look up some ideal image settings on the interwebs. I also calibrate the monitor for use with my PC, so that the image is accurate for post-production work.

The biggest difference between the 6300 and the 6290 is that the 6290 has a stripped down remote that uses just a few buttons and a directional pad for everything. I have no problem with that for my use. But if it was my main TV, a universal remote would be needed.

After carefully shopping I came across this tv for $498. I am more than satisfied with my purchase. This tv is ready to go out pf the box. Not many adjustments to the picture are needed. The colors are bright & the 120 mpr makes everything I watch look amazing (I like the "soap opera" everything looks like live tv effect). Sure this tv is more on the "low-end" of things but trust me you will not be disappointed.