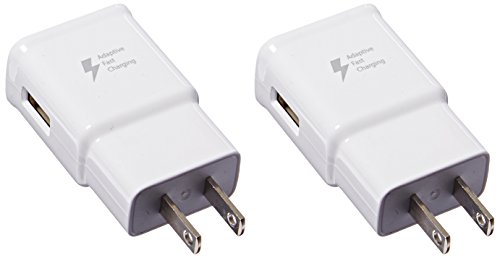 Amazon Review by A. Spade

One worked the other Dead on Arrival. Replacement Sent

I have been looking at getting a 2 additional Samsung fast chargers for a while now, but I have been hesitant to buy ones on Amazon as they don't appear to be OEM even when they say OEM. This biggest complaint I see is they don't fast charge or last long. I took the risk and ordered 2 from Discount Cellular on Amazon. It was about $16 for both that where said to be OEM Samsung fast chargers without the USB cables. I ended up also purchasing a set of USB cables from Discount Cellular as well and they turned out to be great! The chargers tha arrived were both marked as fast chargers which was a plus, and after comparing it the fast charger that came with my Samsung phone the only difference on the labeling was that the OEM charger was made in Vietnam while the 2 chargers that claimed to be OEM chargers were made in China. I plugged the first one in and hooked up the USB cable. I hooked it to the phone and it immediately started to fast charge. The second one however was dead on arrival. I got an email from the company that said the following: "Your order has been processed and should be to you shortly. If you are not satisfied in anyway with your order, please contact us at 844-290-7563 or reply to this email and we will do everything we can to make you happy. Refunds or replacements, no questions asked."

I tried to call the company several times, which is a google voice number, and an automated message just repeated the phone number back to me and said to leave a message. I don’t want to leave a message, I want to talk to a person about my defective product. I will try to call again, but most likely I will contact Amazon for a refund or a replacement if I cannot get into contact with the company.

After not being able to get a hold on someone on the phone, I emailed the company back and told them on my issue. They told me they would send me a replacement the next mail run.

Worked like charm. Fast charging my Samsung S6. For all those who are not seeing this charger fast charging your phone, note that you need the USB cable that support fast charging. This is the one with two little bumps on one side of the connecter pin. Regular USB cable will not fast charge your phone. See the picture.