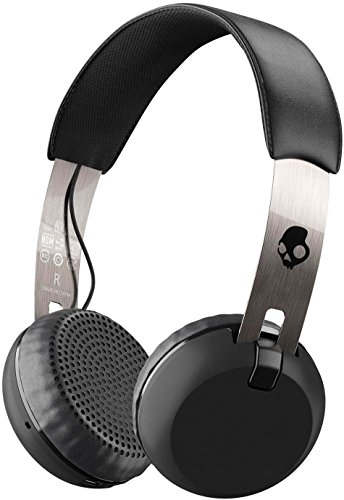 Time to cut the cord... and get mobile!

I am a committed audiophile and as such have an ever increasing collection of excellent headphones. Most of the time they are used when I am stationary, either at my computer workstation or reclining on the couch or bed; but when I am running around doing housework I grab my Skullcandy Grind Wireless Headphones. In the past I would just crank up the volume of my TEAC sound system, but depending on where I was in the home, the volume was either too loud or low -- especially during vacuuming. These Skullcandy headphones are perfect for these tasks. They are lightweight and extremely comfortable to wear and pairing them to my iPad was effortless. The Bluetooth signal is about the fifty foot range from my iPad but because of the wifi configuration of my home, as well as signal strength, your range might vary. The sound they produce is crisp and clean, but don't expect overly aggressive bass. The multifunctional control buttons on the right ear cup are large and easy to locate by touch and navigate. Although the price is inexpensive compared to other name brands, please do not consider these headphones cheap. Skullcandy's designers have constructed these headphones from quality material and components to ensure the product will perform flawlessly for many, many years. For review purposes only I have tried the mic and as expected performed well, but I really do not have a need for it. If their is one thing I could suggest to Skullcandy that would improve these awesome headphones is that a carrying/ storage case would have been the perfect accessory and a great place to store the inline connection wire and battery recharging cable. I would gladly recommend these headphones to anyone.

Its so nice not to have wires and falling out of ear. Bought two, one for the wife and she loves them. We use as were doing jobs outdoor, she a little bit country and I'm rock and roll.

Bought this to use with our TV as we are getting hard of hearing. My wife wanted them for herself. Using this with a HomeSpot Dual Stream Optical Digital Wireless transmitter connected to the TosLink on our vizio m701d-a3r TV. I have all of our devices connected via HDMI to a yamaha receiver with a single HDMI going to the TV and the speakers on the TV are off.

There is a hair bit of lag, but unless your staring at the mouth of the person talking, it’s not very noticeable. I’m pretty particular about that kind of thing and the lag isn’t enough for me to really notice unless I stand 5 feet from the TV and look for it.

I first had her try my bose AE2W headphones, but they were too warm for her ears. She still wore them for a couple weeks because she liked being able to hear without blasting the TV. The skullcandy ones are almost as light, but they aren’t nearly as warm since they rest on the ear instead of enveloping it. They don’t get quite as loud as I had hoped, but she doesn’t have to max them out to hear the voices when people are talking on the TV.

I tried a new receiver that had dialog amplification which helped for a while, but as time went on, her hearing degraded and we had to try something else.

On days when she isn’t working, she has the headphones on for many hours at a time and tends to forget they are on as she walks out the door to run errands. She’s wore them clear to the car on more than one occasion due to forgetting they are even on her head.

She has yet to have them go dead while using them. She charges them at night and if she uses them for many hours in a row, she plugs them in to a charger at her end table for a little while to avoid running them dead. I think the battery is supposed to last 12+ hours, so odds are, unless we are binge watching something on netflix, she won’t have an issue anyway.

I may get a second set for myself so I don’t bend hers out of shape as my head is much larger. However, I’ll have to get another transmitter and a fiber splitter I think as the xmitter I bought is supposed to handle two sets of headphones, but the instructions are very lacking. Which makes it questionable as to if I can get a second set paired without screwing up her headphones.