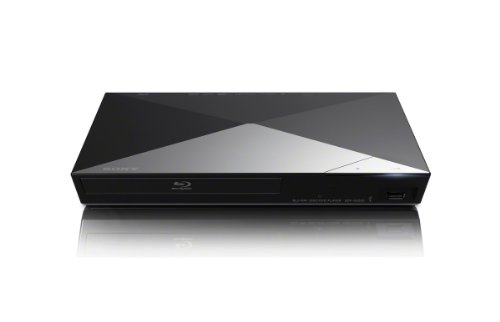 I was going to purchase this online because it is a good price for what it is, and its the upgraded version of the model I already have. When I went to the store to see if they had it, I found out its $10 cheaper in the store. If you buy it and do site to store, your paying the online price and not store price.

Take a few minutes and go to the store, its worth it if they have it in stock. Overall very happy with this DVD player.

Pros: It has a nice HD picture. It has a sleek attractive design. The remote operates at a reasonable distance and is intuitive. Love the big red Netflix button for immediate connection to streaming Netflix without going through the menus. Lots of channel choices on their network. Boots up fast. Starts playing fast.

Small Cons:
There is no user manual, you have to download it.

After powering up, it looks like its ready to go. You can see all the streaming channel icons; however, it needs more time to get connected to the network. if you try to connect, you can get a connection error. Be patient and try again. It would have been nice if they put up an icon or some indicator that said it was now connected to the network instead of leaving us to guess.

Big Cons:
I, like many others (check Sony’s web site for reviews) have had problems with streaming 3D movies through Netflix. My bandwidth is 24.3Mb/S, additionally, I have had AT&T come out and check my service. There are no errors or dropped frames; however, when I launch a 3D movie, I still get the message “connection speed is too slow for 3D”. When I launch the 3D movie again, it may give the same message or it may play. When it does play, it can play right through to the end of the movie; however, sometimes it plays only for 20 seconds, then stops the movie to reload. This can repeat every 20 seconds, continuously. At that point, as advised by Sony, we unplugged and plugged back in the BDPS5200. Sometimes this worked but sometimes it did not. When it did not work, we loaded the same movie as 2D. In 2D it played right through to the end of the movie with no loading issues. It may have something to do with the fact that you must go through Sony’s network to get to Netflix. I and many others believe it is going through their network that may be the problem, regardless of which Sony player you have.

Further analysis of connecting to Sony’s network: Sometimes I get the message that the network is not accessible when launching Netflix. I am using wired Ethernet so I could eliminate any WiFi connection issues. Its a solid connection. To test the connection, I disconnected the Ethernet from the BDPS5200 and attached it to my laptop. No problem. Blazing fast. Connected back to the BDPS5200, “network is not accessible”. Pulled the plug on the player, plugged it back in, waited for 1-2 minutes, tried it again and it worked.

Could it be the BDPS5200? Consider this: I just returned a BDPS5100 because it had the same problems. For as many people that are complaining on Sony’s web site, Sony’s recommendations are text book solutions that are temporary fixes at best, like unplug and plug back in your player and a host of other suggestions that people have tried that either didn’t work or resulted in temporary fixes.

In summary, connections issues appear to be associated with connecting Sony streaming players to Sony’s network when streaming with Netflix. Additionally, their Blu Ray player can have problems recognizing Blu Ray DVDs that requires powering it down, unplugging the power and plugging it back in order to again recognize Blu Ray DVDs.

June 29, 2014 Review update
I waited before updating this review to be sure I had given the NEW BDPS5200 time to show any latent issues. Keep in mind I still have the same fast internet speed of 45Mb/S and as Sony advised, there was a software update.

Results:
3D Movies:
Launching 3D movies resulted in the same error message “connection speed is too slow for 3D, would I like to view in 2D or try 3D again.” This error message occurred at least 50% of the time. When I elected to “try again” in 3D, it loaded every time flawlessly and played the movie with no problems. I have noticed this “connection speed too slow” message happens, at what I would assume, are peak viewing hours (Friday and Saturday evenings). When I tested during early morning hours or in the middle of the day, there seemed to be no issue and the 3D movie launched first try. Is this issue from Sony’s network, the BDPS5200 or Netflix? According to Sony, it’s not their network or their player at fault. If I had another NON Sony 3D player to compare too we would know for sure. However, due to the consistent time relevancy, it appears to be a network problem. Also, when problem occurred I did run a speed test on my home network and it was running full speed with typical latency so I don’t believe my home network is related to the problem.

Locking up:
The system has locked up when launching Netflix just once. I did have to unplug the BDPS5200 and allow it to reboot. It was truly locked, neither waiting nor pushing any buttons (including the home button) had any effect. I use this system frequently and it has happened only once.

Blu Ray:
I have not rented a blu ray disc yet so I can’t review if that problem has gone away. Sorry.

11-14-2014 - The silver bullet test
I streamed a movie from my Amazon account. The move would play for 1-2 minutes, then reload for 5-10 seconds (while we waited) and then start playing again. This was an Amazon Prime streaming HD movie. As I stated before, my bandwidth is 45 Megabit. Certainly fast enough for a NON 3D, HD streaming movie. After about 6 minutes of continuous reloads I turned the Sony player on and off via the remote control. I did not unplug it from the wall and plug it back in. We watched for another 5 minutes and nothing changed, continuous reloads and waiting. I bought down a Roku streaming player that had my Amazon account on it. Unplugged the Ethernet and HDMI cable from the Sony player and plugged them into the Roku streaming player, launched Amazon and resumed the same movie. This whole process took less than two minutes. The rest of the movie played flawlessly. Not a single reload. This suspiciously looks like either Sony’s network or the Sony player is the problem. If you read Sony’s remarks in this post, they say the Sony network is not in the middle of the connection between the player and the service provider. If that is the case, then the Sony BDPS5200 player is defective. Since this is happening on multiple Sony players, this is not the case of a single bad player. I have also kept up to date on all Sony software upgrades. None of the upgrades have fixed this problem. Also, when the picture did play, it would repeatedly show visible digital distortion for a few seconds, then play normal.

Conclusion: It really doesn’t matter if it’s the network or the Sony player because the two must work together as a system. Sony has put together a system that has failed to perform in an acceptable manor. Keep in mind that I have had similar experiences with other Sony models (as I mentioned earlier in this review). Also, keep in mind that I have played many hours of flawless streaming videos with this player. In my opinion, it appears to be Sony’s network because if it were the player it would be a regular occurrence and not associated with high traffic times. This problem occurred around 6:30pm on a Friday evening.

Update on CD’s: Since owning this player for over 7 months, I have had several regular (NON HD) brand new CDs (from Walmart) simply not play on this Sony blu-ray player and I have had to bring in another player or unplug the power from the Sony player and Plug it back in. Simply turning it on and off from the remote will not fix this type of problem. This is certainly a defect in the Sony BDPS5200.