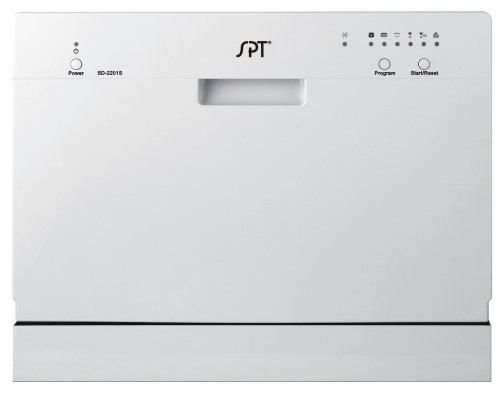 This dishwasher appears to be very well made but, as I said I have only had it a week and time will tell how durable it really is.

As for cleaning a large load of dishes this dishwasher does an outstanding job! Does it hold up to six place settings? Everybody’s dishes are different and it holds about four and then some for me. For those of you who are wondering if this washer drains the water by gravity or it is pumped out I believe it is pumped out but, I could not find any documentation on this. Very easy to hookup to you kitchen faucet. Does a great job drying the dishes.

Update 10/26/2011: Dishwasher performs perfectly! Here are some additional thoughts - It says it in the directions that come with the dishwasher but make sure you add your dishwasher powder just before you start the wash not 2 hours earlier or it will harden.

Did a lot of research -- this is the one!

I had done a lot of research before getting this countertop. I had originally started looking for a different brand, with a smaller capacity, and avidly read the reviews. After seeing the reviews and comments for that other brand, I decided that I would expand my search a bit, and came upon this SPT model, which has a larger capacity and was only $50 more expensive.

I have used it several times since picking it up at the store, and I’m extremely happy with the purchase! I will confess to being a mechanical dunce, and even I had no problems installing it with no leaks!

I thought 80 mins for a total cycle was a little long, but, once I used it, the SPT did something the other model could not claim to do: actually DRIED the dishes. With no windows, it won’t have the problems that others complained about on “windows versions” of the compacts (with leaking seals around the glass), and I’m happy not to have dishes sit in the sink for when I’m too lazy to do them. On another site, someone complained about the noise during operation–it’s not whisper quiet, but it isn’t distracting, either.

I would heartily recommend this to a friend!

This is an excellent purchase

I have had this dishwasher for about six months, and I haven't had any problems or complaints about it. I works to wash normal sized dishes, cups, bowls, pots, and pans. It's easy to setup, easy to use, and easy to disconnect. I would highly recommend this product to anyone looking for something space saving that also works very well.