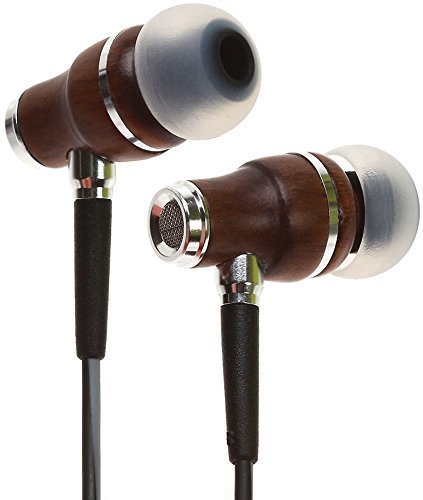 Got these as part of my wife's Valentine's Day gifts. The ear buds she used prior were just...like...bought at Target or over-priced Best Buy stuff which by-and-large are the same thing. She'd complain that the sound was "tinny" ... You know, the usual stuff.

Well, I went out on the net and started fishing around and found these on more than one list as being best for the buck. Still, I was leary even as I read the reviews here on Amazon. You have to be able to sift through the reviewers who pan everything and those who give 5 stars because the packaging was intact.

Understand I am nobody’s audiophile. Used to be…more important things to worry about as we age. Anyway, I took a kick at the cat and ordered these solely because of the wood earpieces. They showed up and I tested them on my phone…with some Head East, Deep Purple, Gary Puckett and the Union Gap, George Strait and The Moody Blues. TWO WORDS: Truly Impressed!

Now, I’m not the real benchmark. My kid seems to have more money than God and owns a set of those $150 ‘beats’ that it seems all iPhone owners HAVE to have. Without telling him I paid $25 for this set, I had him try them out. His exact words were: “For once you didn’t cheap out, Old Man”. After my initial inclination to backhand the young turd passed… I made him elaborate on what be thought. Solid base while not sacrificing mid and high range … He said be too loved the wood and the overall sound. Then I told him they cost $25.

Me? I prefer full head phones … But these are really good buds. I’m getting a pair for myself. That’s my review … No specs or superlatives. Just a good product.