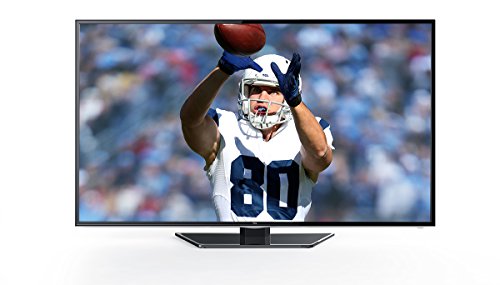 Can not connect to internet. initially, set this TV in Family room (Cisco router in living room) but it can not detect signal of wifi. Following the manual, move TV to next to router in 5 feet. it scaned and detected my router but after enter the password. still can not connect. IT says suport 802.11b / g/ n and my router setting is 802-11n. did a trouble shooting for whole day. rename my router name and change password to be chariacter-numeric only. then scan. new name shown up one time and enter the new password but still can not connect to internet. tried a couple of times, then suddently only show old router name. Feel cache issue but can not reset it. So returned it and bought Vizio which is excelent and easy setup. in anywhere of house like laptop.

We were looking for a larger tv, and didn't want a smart tv - just something with a good picture, and hopefully a higher refresh rate than 60hz. (more on that later).

We just recently got Directv back after being away for a couple of years to save money. Initially I was a bit underwhelmed by this tv because the installation guy hooked it up using the coax cable, rather than an HDMI cable that he left behind. Just a small oversight, I guess. Some stuff looked great, some was just OK - it really depended on the channel.

A few days after the install I was mounting the tv to the wall and hooked it up with the HDMI cable only, and there it was - the beautiful picture I’d hoped for! Everything looks absolutely incredible now. Sports are crisp and clear, there is no ghosting, no digital artifacts, nothing.

Sound-wise, this tv is actually surprisingly good. No tv is going to have any kind of bass response from the speakers. The default settings can sound a little boxy or tinny - but the thing is, dialog is very clear, which to me is a plus. Half the time when we watch movies at home the music is too loud and you can’t hear what anyone’s saying. So I adjusted the equalizer to remove much of the high end, kept the midrange at about 3/4, and boosted the lower frequencies, and it sounds pretty good. Not thin, but balanced, and you don’t have to crank the tv to hear what’s going on. No house-shaking bass, but that’s not the end of the world for me.

Now, the refresh rate. The TCL site says its 120 hz, the box says 120 hz. The manual says 60 hz - but the manual also covers several different models. So, is there some sort of faux 120 hz software thing going on? I don’t know. I can say for certain that our old 32" flatscreen is 60 hz (Proscan, 1080p) and while the picture is good, during fast motion during sports there is some blur, etc. Not so with this TCL tv. It handles sports beautifully - exactly as I’d hoped. So I don’t know what the answer is, but I’ve got zero issues with the picture on this tv.

One last thing - if you’re looking to program your Directv remote to control the tv, I finally found something on the Directv forums which suggested using codes for RCA tvs - which is what ultimately worked. It was driving me crazy for a few days.

Overall, this TV is incredible. We couldn’t be happier.