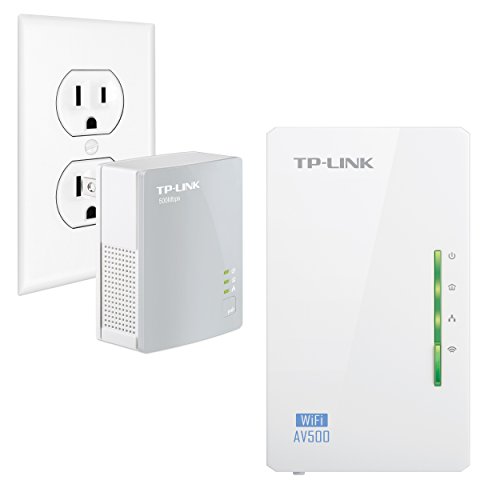 We have a large 2 story house that had mediocre wifi coverage. I looked at getting a repeater but after reading several reviews decided on this wifi power line adapter and couldn't be happier. Forget the repeater and get one of these. You won't be sorry.

Useful and inexpensive kit but high speeds will be illusive

This is a very affordable and useful powerline networking adapter from TP-Link. It consists of two powerline ethernet devices - one that connects to a router, and another one that has two ethernet ports and a built in wireless access point.

When both are on the network the two port + wireless adapter will route all of its traffic through your home’s electrical wiring to the other device. It works quite well and is an easy way to extend a network without having to run ethernet cable.

I have found that these devices are rarely a replacement for ethernet. In many ways they’re better than wi-fi but I have never come close to getting the promised 500 megabit speed that this and other products tout. The reality for me is closer to 100 megabits and that is when the devices are connected to the same outlet.

In a real-world application the best I can pull down is about 30-40 megabits of sustained speed. That speed is more than adequate for web surfing but probably not as good for more demanding applications like Blu Ray media serving and other high bandwidth applications.

But on balance this is the best powerline kit I’ve reviewed. So if you’re in the market for one this is certainly one worth considering.

DISCLOSURE: TP-Link sent me this product to review.

excellent solution to my problem

I purchased this so I could get rid if the Ethernet cable running between my garage/office and my house, as the winter is brutal on it. I was skeptical that I would have positive results with maintaining good speed. I am pleasantly surprised. Not only was the setup for this device beyond easy, I lost no speed from the connection over the Power Line Unit vs the Ethernet cable. I am paying for 50Mbit service and I still get that with this device, just as if there were still a cable going between the house and garage. The WiFi is at 30Mbit which is better than I was getting with a repeater. Overall, this is well worth the money and easy to setup. Remember to change the WiFi password settings for security.