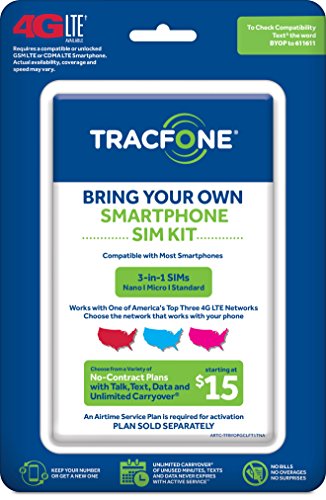 Amazon Review by A Cheap Guy in Phoenix.

These are great to activate a compatible phone on Tracfone. The kit comes with everything you need to activate either an AT&T, Verizon, or unlocked phone on Tracfone. The kit comes with all three sizes of SIM for both GSM (AT&T) or CDMA (Verizon). You can get these for three bucks at Sam's giant department store, but you have to order them from there too, and they take longer to arrive. Since it would just be crazy for Tracfone to sell their own product online, they don't sell these. That was sarcasm, by the way.

Anyway, changing from a Tracfone to your own phone under BYOP is pretty painless. I’ve done it twice without issues. On a third phone, my minutes, texts, and data didn’t transfer, but I called and they had it corrected in just a few minutes. It works great. If you order an unlocked phone from Amazon, half the time, there’s a link under the phone to tack one of these kits on, so you get it with your phone.

9/9/2016 Update:
TF now does have a T-Mobile SIM on their website. Of course, right now, it’s out of stock. I have no idea if the T-Mobile SIM is included in this kit or not.