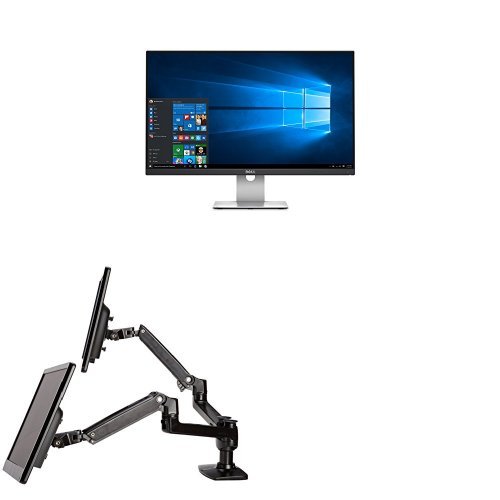 This is a good solid monitor. Unless you’re doing heavy-duty graphic design, this should meet all your daily needs. It has a bright display, sleek physical design and a decent audio system. I currently have dual 27" monitors hooked to my office. One is this one, while the other is a more expensive Asus PB278Q Professional Graphics Monitor. Is should be noted that the Asus is more closely matched to the Dell U2713HM than to this unit.

There are a number of areas where the Asus and/or the Dell U2713HM are better than this monitor. None of them may be important to you and worth the substantially higher cost…they certainly aren’t critical if you’re just doing office work.

As I said at the beginning, this is a good solid monitor. I’m now using it as my primary screen and moved the Asus aside, for when I need the higher resolution. If the negatives that I mentioned in my comparison to the Pro monitors aren’t critical (and for most they aren’t) I have no hesitation recommending it.

I think this is a great monitor if you're looking for an IPS monitor that's affordable. I specifically bought this because it has an IPS panel, is wall mountable (VESA 100 x 100), and has two inputs, one of which being an HDMI input for my Xbox One. I actually bought two of these and mounted them to the wall side-by-side. It looks amazing thanks to the thin bezels. I regularly switch between have dual monitors for my PC to having on screen for the PC and the other for the Xbox. The screen does have a glossy finish, so if you're going to be sitting near a window with the monitors facing the window you probably should consider a monitor with a matte finish instead.

I am very pleased with the image quality. Thanks to the glossy screen, colors are vibrant and accurate, and the viewing angle is great. There is a little bit of light bleed in the corners, but no more than I would expect from an LCD monitor. For gaming, input lag is quite low. An online reviewer measured it at 4.8 ms. I do notice some blur occasionally, but it’s not bad. I do think it’s to be expected because of the 6 ms G2G response time, 60Hz refresh rate, and it’s an IPS monitor. It does have an overdrive mode so you can switch between a “normal” response rate and “fast.”

The speakers are fine for casual use. I think they’re actually good for a monitor, but don’t expect them to compare to desktop speakers. I use them occasionally with my Xbox when I don’t want to put on headphones.

There are some negatives. Firstly, it does have an external power supply (power brick). It doesn’t really bother me, but I thought it was worth mentioning. Secondly, of the two inputs, one is HDMI and the other is VGA. I would have preferred that second input be DVI or DisplayPort instead of VGA. Third, this may not matter to most people, but for those who like to “overclock” their monitor, you can’t. The S2415H maxes out at 60Hz.

Despite those minor negatives, I’m very pleased with my purchase, especially because I bought it on sale. If you want an IPS monitor with good image quality, is wall mountable, has low input lag, has an HDMI input for a gaming console, and you’re okay with a glossy screen, I’d recommend this one.