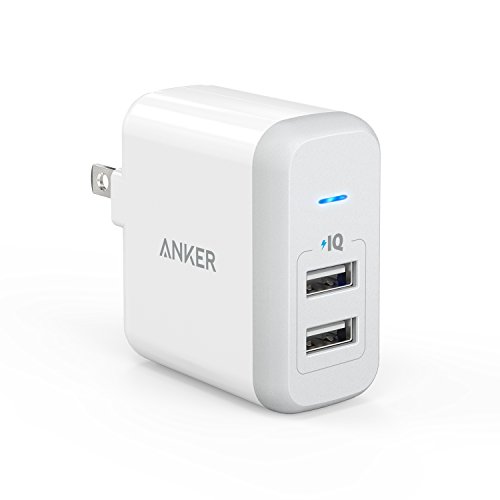 First Impressions: The first thing I noticed after taking the charger out of its protective sleeve, was the heft. This charger really must have a decent transformer inside of it. I have 4 port chargers that weigh less than this. Whether the weight is a transformer or heat sink its a win win in a charger.

Build:
The finish is glossy white with a matte grey front fascia. Luckily the white does not show fingerprints and the grey wont show scratches from the plugging of USB ends. The 2 prong wall 120V plug has a nice click when folding and unfolding and allows the charger to be plugged in either way. The charger is also no wider than a fruit named company’s standard brick charger.

LED indicator light:
Quite the nice feature as a lot of phones charge faster with the screen off. As soon as a (likely) shunt resistor shows lack of voltage on the output, the light will return to blue indicating a full charge.

Heat:
Even with both ports under a (2+2) = 4A load, the charger only got slightly warm to the touch. The efficiency is great in this bad boy.

Voltage Boost:
Quite the nifty feature here, I have a resistive load tester and on a 1A load the charger output 5.08V but when a 2A load was present which will increase voltage drop in a cable, the output voltage was boosted to 5.15 volts to compensate. Very cool.

Filtering:
It also seems that very clean power is output by this charger. I don’t have an oscilloscope but large capacitance almost always show a clean output. I was able to unplug the charger and have my output monitor stay lit for almost 5 seconds. Quite a few millifarads here.

Final Thoughts:
From an electrical engineer’s perspective, this is THE charger for anyone with an Apple product