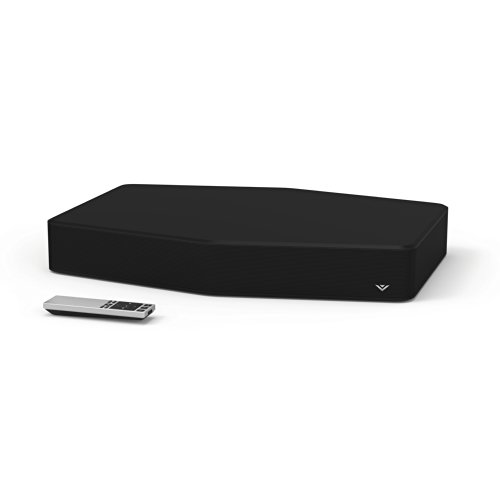 Absolutely great - but buy a roll of shelf liner

Received as a gift. Years ago built my own components from kits and then bought Scott but never quite reached the B & O class. So, I have assembled several 5.1 systems and have seen quite a lot of changes/improvements during the last wonderful 60 years.

But I, too, was blown away from the moment I turned this unit on. Agree with others about the highs & lows but must point out the mid-range is also impressive. I hear background sounds, car doors slamming, crickets, etc. that were never there before.

Only one suggestion. The woofer is so husky that the top of the unit vibrates and attenuates the plastic stand of my new 55" Vizio flat screen. I bought a roll of that sticky black shelf liner in Walmart’s kitchen accessories (about $6.00) and cut an insulating pad placed between the unit and the TV stand

Remarkable sound for a single unit

I got this for my guest room for a television that didn't have very good sound. I've been adding soundbars to my tvs around the house, but this is my first 'sound stand'. Very easy to set up, packaging included everything I needed. After it was set up, I was completely blown away by how great the sound was... unlike other systems that are suppose to be 2.1 sound in a single unit, this one truly sounds like a 2.1 system. Sound seems wide, as if the speakers are actually separated by a distance rather then coming from under the tv. Bass is fantastic too, much stronger then any other soundbar system I own.

The unit offers a whole range of input options… RCA cable, 3.5mm, digital optical, and digital coaxial. Remote is excellent… good quality, not cheap lot a lot of soundbar remotes seem to be. The remote controls everything through dedicated buttons rather then multifunction buttons that require you to remember what each press is for. Controls for Bluetooth music, such as play/pause, skip, etc. are also included.

Features include TruVolume, which keeps the volume at a particular level (good for commercials that have their audio amped up), and TruSurround HD, which improves sound for a surround feel to it. Twelve LEDs on the front tell you everything you need to know… from when the system is in Bluetooth pairing mode (scrolling lights), muted (blinking), and even what input is selected.

Bluetooth was easy to pair, however after several hours of listening to music through my phone, I did hear the music cut out a couple of times. It was extremely brief, nearly unnoticeable, but that’s never happened with any other Bluetooth speaker I own, so I’m not sure who’s to blame. It was rare and brief enough that it’s not a big deal, however I’m concerned that it may be a software issue and since there’s no ethernet or USB ports on this unit, there’s no way to update the firmware.

The speaker is impressive enough that I found my wife watching TV in the guest room where the Vizio sound stand was installed. After a couple of days, I ended up moving it into the dining room where it could be used more.

The manual states that you should not place TVs that weigh more the 60 lbs on this stand, but that seems low to me as the unit is incredibly solid. I could probably stand on it, it feels that sturdy. The unit itself has three sides with speakers, which is how the system manages to sound so wide, however it’s important to remember this fact as anything placed next to the unit will effect how it sounds. There’s also a bass port on the back, so it’ll have to be kept away from the wall in order to keep from blocking it.

Overall this is a truly amazing speaker stands that improves my TV’s audio better then any soundbar I’ve used. I would highly recommend it.