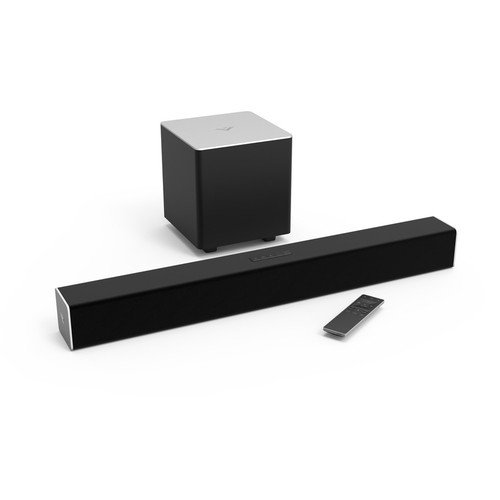 EDIT: I figured out what was making it shut off so much--it has an Energy Star setting turned on from the out that can actually be turned off by hitting the Power button and the Volume Down button (ON THE SOUNDBAR, it doesn't work on the remote!) and holding it for 5 seconds. The LED display shows it shutting off and now it stay's on full time :-) My bad for not thoroughly reading the instruction manual...I'm a man, so yeah :-D

This one I took a huge chance on as I saw zero reviews for this version anywhere on the web…but for a 32" tv setup, this may be the best deal out there.

The price made me think this wasn’t gonna be all that great, and I almost passed on it for an established Samsung or LG soundbar in this price bracket. But I decided to take a chance and I was really surprised by what I got for under $100.00.

The unit is smallish, only 28" long with an equally smallish wireless subwoofer unit…and at first glance I thought “uh oh, this is gonna be bad”…but then I set it up (under 10 minutes total, no joke, optical cable to the tv, plug in the sub and soundbar, and you’re done), and boy oh boy was I ever surprised. The sound is very rich, clear and spacious made better still by the rather large assortment of effects available. These include a very convincing TruSurround HD button, and even the TruVolume setting was very effective at keeping the sounds level and non jarring. Bluetooth devices paired in seconds and work great up to around 20 feet (YMMV depending on what your sending the signal with, of course).

And the sound levels are capable of getting very, very loud with out distorting, that was the biggest surprise of all. It filled up a very large bedroom effortlessly, with the treble and even the bass being very strong and in your face…wow, amazing! That tiny subwoofer puts out some floor thumping output, where it’s coming from is anybody’s guess, lol, it’s just there, strong and clear…again, amazing.

VIZIO deserves some praise here for this one, it’s simply shouldn’t be this good for the price paid. The only negatives I can find are that if no sounds are made for a few minutes, it just shuts off, no warning at all. Annoying more than anything, but there it is (SEE EDIT ABOVE for the fix!). Also the LED dot system that they use (they are along the left edge of the soundbar) instead of a full LED scrolling display that most of it’s rivals use is a pain to get used to…it works, but it’s not that great at letting you know what your doing sometimes. That’s it, nothing else tarnishes this rather stellar soundbar experience.

I’ll end this by saying that this is a fantastic deal at only $99.00, it’s a must buy if you have a smaller tv that needs a boost in sound performance, just buy it and enjoy a great sonic experience for not a lot of cash!

The sound bar delivered as we had hoped. There is more clarity and better quality on the TV. We love both the Vizio TV and the sound bar. Can't say that the TV alone has very good sound. It may be because our unit sits in a cabinet. Sound bar definitely helped.