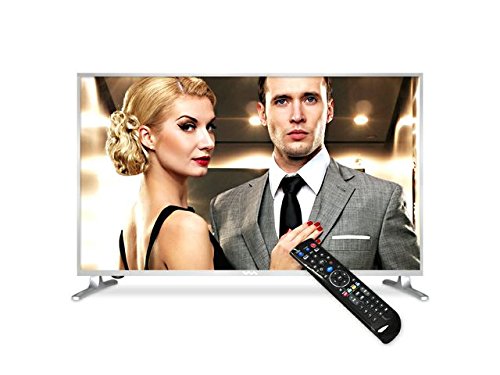 Not bad for casual use, but let down by lag, uniformity, and image retention

I bought a "pixel perfect" version of this screen from another seller primarily for image editing. While it's effective for casual use in this context, linearity problems defeat color-critical work. There are no 40-43" 4K screens that measure much better as of this writing. I opted for this Wasabi over the Philips BDM4350UC ($200 less, albeit without Freesync) because it has an RGB subpixel panel. The Philips has BGR subpixels that can cause problems with Windows ClearType if you pair it with an RGB panel.

It arrived quickly and well-padded. No shipping damage. The build quality is better than I expected, slotting above my QNIX 2710 (classy brushed-aluminum bezel) and somewhat below my Dell Ultrasharp screens (low-rent plastic in the back, exposed screws). It comes with HDMI and DisplayPort cables and a remote labeled in Korean. Fortunately the pictures in the manual (also in Korean) are clear enough that there isn’t much of a learning curve. The OSD has a setting for English, a language also used for the labels on the ports in the back. The stand components are totally unadjustable, but quite sturdy. There are VESA holes for third-party mounts.

Good overall. I don’t see any stuck or dead pixels, though there’s a very small blemish in one corner: a slightly dim spot about a quarter-inch square (perhaps a shadow from a screw?). It’s invisible in normal use. Brightness linearity is average for a panel this size. The left and right edges dim noticeably on a white background starting at about four inches in. Color linearity is middling. The left and right edges have a subtle magenta shift in tandem with the dimming. The remainder of the left side of my unit shifts green. The top left and bottom right corners show a bit of IPS glow with fullscreen black in the dark. There’s no backlight bleed.

This display calibrates well. Like most decent screens, it has hardware adjustments for white balance in the OSD. Unusually, it also supports 10-bit color, though not Adobe RGB’s larger color gamut. The first run with my ColorMunki Display paired with DisplayCal produced an acceptable result with a reported average dE below 1 for the sRGB gamut. By comparison, the QNIX and my Dell 2408WFP required endless tweaking so they wouldn’t crush the blacks. Still, given the linearity inconsistency (common for panels this size without uniformity compensation), I don’t expect to do color-accurate work outside of the center third or so.

I do see signs of image retention if I leave high-contrast items on the screen. They disappear within minutes on their own with a gray screen. This is apparently a more significant problem with both the Philips screen and Dell’s similar P4317Q. The screen coating is slightly glossy and yields a subtly sharper picture than the matte QNIX.

Latency averages 66-69 ms more than the QNIX. I see a 100 ms difference every few camera shots that suggests the Wasabi is often behind by three frames. My QNIX has no display scaler, so input lag on that one is barely perceptible at around 3ms. This Wasabi, it’s actually bad enough that speech noticeably precedes mouth movements. It’s certainly not a gaming screen. Professional use is unaffected.

I discovered that my GeForce 750 Ti graphics card won’t drive both the Wasabi and QNIX at 60hz. If the QNIX is plugged in, the Wasabi drops to 30 hz. This hasn’t annoyed me nearly as much as I thought it would, but I’ve still ordered a more powerful Radeon card to replace the GeForce.

The resolution of this screen is mesmerizing. I could watch 4K YouTube demo videos all day. It’s striking, even compared to the 1440p QNIX. Pixel density between the two is very similar. Viewing distance is the same 2’6" as usual; I’ve felt no need to move backward. It took all of ten minutes to acclimate from the 32" Sony screen I used previously as a primary. Only the additional brightness is a little uncomfortable at night. F.lux helps here.

My impression so far is that the best approach to productivity is to use software to split the screen into three vertical components. My 27" screen is about 23" wide. This Wasabi is about 37" wide. Proportionally, and accounting for the similar pixel density, you’re basically adding an extra tile on one side and gaining some height. Window-snapping in Windows 10 doesn’t natively allow for a three-way split, so I’ve installed GridMove.

I have Windows scaling set to 150%. Just about everything works fine except for Photoshop. PS only has 100% and 200% scaling, so you’re either getting an enormous UI or one that’s a bit hard to see. There’s a bit of UI wonkiness with oversized cursors regardless of which setting you choose. Not unusable, but annoying in ACR.

This is a 3.5 star screen. Packaging, build quality, brightness, and the OSD adjustments are all solid. I expected better color uniformity, however. It’s adequate for general use, but borderline for image editing. That miss and the significant input lag defeat much of the utility of the UHD430 for me.

Pricing is unusual for an import. The Philips 43" is akin to the “pixel perfect” version of this UHD430, but comes from a US distributor with all-English support and labeling and costs $200 less. (Albeit with image retention problems that’d prevent me from actually buying one; it’s useful primarily as a price reference.) Sony’s $700 XBR43X830C is similar. The Dell P4315Q’s inflated $1400 MSRP is the only outlier.

By QNIX standards and accounting for the quality increase, this screen should cost around $700. Given that it’s effectively a 4K television with a DisplayPort input, I imagine it would be profitable even at $500. We should see that pricing soon enough when it has more competition.