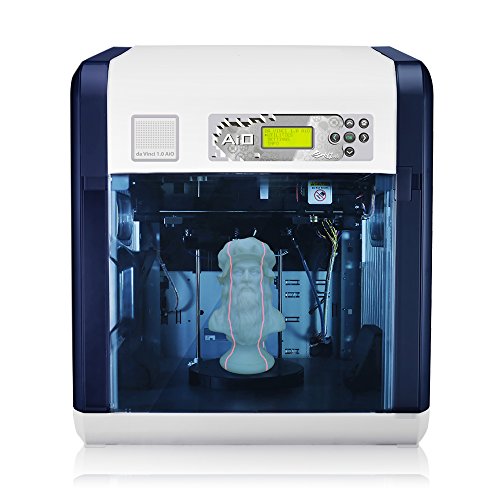 This is a good 3D printer that produces quality results. There are a few items that could be improved. One- The manufacturer will improve the software in future releases. Two- This printer also uses proprietary "cartridges" for comparatively expensive printer filament. This obstacle can be overcome by purchasing a filament counter reset device from a well known online auction website. This is a good quality unit that I'd recommend to others based on performance and price.

The XYZPrinting da Vinci 1.0 AiO is an affordable approach to 3D printing

I have a fair amount of 3D printing experience though I have never owned a printer before. My previous work was on a PolyPrinter - a great unit but more expensive than a Da Vinci and if business looks good I hope to upgrade at some point. That said, I suspect some other reviewers haven't had my advantages so I'm including a sort of walkthrough of my first print with the Da Vinci AiO. I may at some point change this review (4 stars) depending on scan accuracy which I haven't yet tested and the precision of the prints of different models. I rate this relative to what it promises - low cost 3d printing in a pretty complete experience. If I were rating it as an expert I would mark it down as it doesn't have the customizability of the more flexible (but less user friendly) models out there.

My experience to date —
Experiences with the XYZ AIO 1.0

Wow, weapons grade. The box is large, strapped with two pair of nylon straps. Inside the styrofoam is custom made for the printer. There is no way for it to move inside the box. The print head is locked in place with custom plastic pieces and wires are held down with a heavy duty cable tie. The packaging seems serious - but means it is possible to leave a piece in place which I’m sure would screw things up. Guideline - if it is orange, styrofoam or cardboard it shouldn’t be in or around an unpacked printer.

Dropping in cartridge - followed the instructions and it seemed to go fine. Note that the Da Vinci has a cartridge system which inevitably means manufacturer only provided input ABS. That invites overpricing though they are running only 20% above average right now (perhaps because they include the nice cartridge). I have no way to know if anyone has come up with a third party method of refilling the spools but that would be something to search for if you’re frugal or doing lots of prints. It took 2-3 extrusions for the first spool to set. I cranked out about a foot of yellow abs (factory testing color?) before my white began coming out using the on-printer utility to extrude.

I opened XYZ ware and it immediately requested an update. One update later I closed it down, downloaded a pen from Thingiverse and prepared the bed with the recommended glue.

First print, Yay! It’s a giant blob on the end of the extruder. Boo. Not exactly what the model showed. It looks like the print lifted from the bed during the print. I followed instructions, adding the glue as suggested to no avail.

Second print: the logo built into the printer. Same problem though the larger surface in contact with the bed meant it held on a little longer. It looks like the extruder head is starting a bit above the bed and dropping the ABS onto it rather than doing the first line in reasonable contact with the bed. It is pretty hard to tell though as we are talking about sub mm sizes. I’d expect misadjustments that small can come from anything - compression, stretch or minor changes in belts, fittings, springs, even the paper in the heating plate. A standard recalibration should take care of that but there are warnings all over the thing that say do not calibrate, comes factory calibrated.

Ok so off to calibration and - total fail with an ERR message. Looks like my bad print left material on the detecting pin which is electronic so it has to be clean. Off to cleaning with the included wire brush and printer cleaning utility.

Calibration 1 - there’s the problem. It should be in the 220-250 range for each of three numbers. Mine is 107, 183, 200. The adjustment screws are a bit tricky to link to specific adjustment knobs. They do not match the contact points. The center front knob impacts the second two numbers which makes sense if the second two are indeed the second two measurements taken. Incidentally the calibration temperatures for this cartridge look to be 220c/90c. It would be nice if there was a way to keep the bed hot while calibrating/rechecking/calibrating. Calibration takes a bunch of slight turns and rechecking.

Ok, calibrated. Let’s try a Star Destroyer scaled down. First things first the USB driver is giving a not recognized error. I reboot and turn on/off the printer. That gets it recognized again. The scale down doesn’t work quite right and shows just the superstructure of the model. Dump that. Let’s try a scaled down Weeping Angel. It took a while to slice but I browsed the internet while it did so. No multitasking problems The resulting model looks good. I’ve got rafting and supports enabled.

Result: fair. I probably should have printed at higher resolution. After that I ran a geometric figure (came out fine)

I received this 3D printer as a gift. It came calibrated and I have not had to do any re-calibrations. So far I have printed several parts for a custom robot build, and other than errors on my part (poor measurements) everything has come out great. Once I corrected my measurements, my electronics fit perfectly inside the parts I created. Keep in mind, this is not like your normal desktop printing. You are not going to print out designs in minutes. Print time is generally measured in hours.

The included software includes options for automatically adding support for overhang on the model. This support is easily removed once printing is complete.

I have only scanned a few items, so I cannot speak comprehensively. But I have had good results.