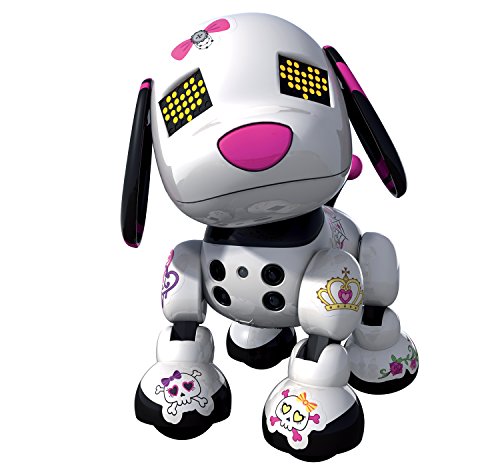 My daughter likes Scarlet. She enjoyed decorating her new pup with stickers. Some of the functions are hard to figure out. We have read the instructions together more than once and can't figure out how to do the games.

The puppy makes cute noises (most of the time) and plays song. I do wish there was a volume control. Scarlet interacts when touched on the head, back and nose. Also, it has sensors on its chest that can detect if you are moving.

The eyes light up to show emotion. Twice we have made the pup angry on accident. It barks and growls angrily. The only way we could figure out how to get it to stop was to turn it off.

There are rollers on the feet so it can zoom. The legs bend, but the puppy doesn’t move on its own.

Make sure to turn off the pup when you are done playing or you’ll have to replace the batteries (doesn’t shut off automatically after inactivity).

BzzAgent Reviewer.......After a much anticipated wait our Zoomer puppy arrived. Her name is Scarlet. The kids were very excited to start playing with Scarlet. Scarlett came with an instruction sheet which illustrated many of Scarlets features. The instructions were easy to read and my 9 year old squealed with delight as she read what Scarlet could do. She immediately started testing the features. Scarlet sings, plays games and likes to be given attention. Dad and I had to read the instructions for my 6 year old who has learning disabilities, but once we showed her the different features she was able to play with Scarlett as well. Overall the toy was easy to play with and believe it or not its been over a week and Scarlet is still being played with by both girls. I have bought many toys that after only a few days the kids lost interest.